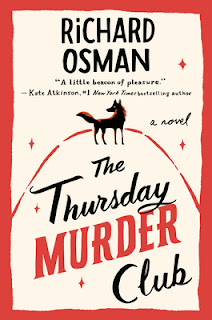 Welcome to Coopers Chase--an upscale retirement village with all the mod cons from a "contemporary upscale restaurant" for all your dining needs to clubs and activities to suit everyone's tastes. There is a group for Art History and another for Conversational French...and then there's the Thursday Murder Club who meet (surprisingly enough) every Thursday to discuss old cases. They look over materials and examine evidence and try to figure out if the police fingered the right person. The group of sprightly septuagenarians are a diverse group. Elizabeth is the leader--decisive, persuasive, with more connections than an old-fashioned operator's board. We're never told exactly what Elizabeth was in a former life, but there are definite MI5 vibes going on. Then there is Ron--well-known in his younger years as Red Ron--always up for bucking the system and telling officials where to get off, especially in a fight for an underdog. And Ibrahim, a retired (semi-retired?) therapist, who uses his knowledge of human nature as well as his incredible encyclopedic memory and calculating skills in the good fight. The newest member (and our sometime narrator through diary entries) is Joyce. Joyce used to be a nurse and can help with medical knowledge. She also has a way of being easily overlooked that comes in handy. It allows her to observe others without them realizing it.

You might wonder how this merry band of sleuths are able to get their hands on case files. Well...as mentioned, Elizabeth has connections. Plus, one of the other founding members, Penny, was a cop. A cop who despite regulations made copies of everything...and brought it all along with her to the retirement village. [Penny has since slipped away into dementia and can no longer participate, but her files are the gift that keeps on giving.]

When Tony Curran, a local developer who, along with his partner Ian Ventham, plans to expand the retirement village and, incidentally, bulldoze his way through a old cemetery full of nuns, winds up murdered, the Thursday Murder Club get the chance to dive into a current murder investigation. They no sooner learn of Tony's death than Elizabeth has a foolproof plan to weasel their way into the good graces of the local police. DCI Chris Hudson isn't going to know what hit him. More bodies are found; Elizabeth and Joyce take day trips to London to track down suspects; and Ron and Ibrahim take a quick jaunt to Turkey--all in pursuit of justice. These four may be in a retirement community, but they've got all their wits about them--and that's more wits than most.

Well...that was just too much fun. It's worth the price of admission just for the scene where all the 70- and 80-year-olds in the community confront Ian Ventham and his earth-moving equipment. They hold a picnic-slash-tea party in front of the gates so he can't get in and start digging up the cemetery. Osman has created a great group of characters and it's incredibly easy to throw disbelief to the winds and go along with the idea of these four fearless amateurs taking on the bad guys. I enjoyed watching them out-maneuver the police and wangle information that the police might never have discovered. The one thing that keeps this from being a full five-star book is the plot itself--it's a bit convoluted for my tastes and there's one other stumbling block that I mention in the spoiler section below (don't venture further if you haven't read it). Otherwise--a thoroughly enjoyable mystery novel. ★★★★

The one real quibble I have is that there isn't just one killer. We have multiple deaths and multiple killers and multiple motives--though I suppose that you could say that most of the killers were acting out of an urge to protect or avenge someone. But I prefer my mysteries a little tidier and that all the deaths are linked in a very real way. I will also say that I was disappointed that Tony was the first to die. Ian Ventham was a loathsome man and I fully expected him to play first victim. He does get his...but not for the reason I thought he would.

First line: Well, let's start with Elizabeth, shall we? and see where that gets us?

Last line: And right on time, there's my crumble. I will let you know how everything goes.

Deaths = 9 (one hit on head; three poisoned; one hung; three shot; one stabbed)

Please put me out of my misery and explain!!

Lucy: It's been a few months since I read this and [full disclosure] my memory for detail isn't what it was [my memory gets more sieve-like as the years go by]. IF I remember correctly, Ian was killed because he planned to dig everything up for the expansion and John was afraid Penny's crime would come to light.

But why would that cause penny's crime to come to light. How is it connected. I am so confused

As I said--it's been a few months since I read it. I don't hold on to details like I used to. I don't know that it makes logical sense--but people who murder don't always have a logic that makes sense to everyone.

I agree this plot line is a flaw. Penny (a police officer) killed the murderer who said his girlfriend was a victim of a burglary because he got away with it and she wanted justice. So I can only surmise that John thought the body would be found and linked to Penny - though how, I don't know.

A few too many crimes, characters, threads - but an enjoyable listen (on Radio 4).

This may help, the body was buried in the graveyard which was part of the new development.

I don't understand why Penny, a police officer murdered Peter Mercer, there is no reason other than that he murdered his girlfriend. A police officer just wouldn't do that.

Just finished the book. Couldn't lut it down. Odd end. So Penny murdered the body in the graveyard?

I thought the body in the graveyard was the sheep farmer that John killed?

The sheep farmer was a made-up story to protect Penny. The body Bogdan dug up belonged to Peter Mercer, the boyfriend of the girl mentioned at the very beginning of the book. Penny killed him to avenge her.