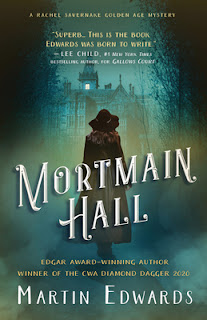 The drawing is an optical illusion Clever artists delight in them. Your eyes are drawn to a picture. But on a second viewing, you realize that you're looking at something else entirely. That's the way I feel about this gathering here at Mortmain Hall. We're seeing one thing, but something very different is going on, without us even realising. Right in front of our eyes. [Rachel Savernake]

The theme of this book is "the perfect crime." We're clued in to that from the very beginning--in the unusually placed excerpt from the Epilogue where an unknown (at least at this point) man is dying and Rachel Savernake is speaking with him. He knows that she has discovered the truth about what he thought was a perfect crime. And now she wants him to fill in and/or confirm details.

Then we're whisked back to the beginning. Rachel Savernake prepares to board the Necropolis Railway, but she is not a mourner. Her mission is an attempt to save a life--the life of a man who is supposed to be dead. But the man is too afraid to admit his identity and won't take the lifeline she offers him. And he winds up dead (again) on the railway tracks. Her interest in the forces that sought to silence Gilbert Payne lead her to investigate a series of murders: the death of a tramp in a blazing car; a woman strangled in seaside bungalow; and a husband drowned in a freezing lake. In each case the most obvious suspect is proven not guilty through a last-minute witness or someone else conveniently commits suicide, leaving an apparent confession or a hostile judge prejudices the jury in the suspects favor. Rachel is convinced that these cases have a connection--but what can it possibly be?

Jacob Flint, crime reporter, is in attendance at the blazing car trial and he--like everyone in the court--is amazed when an eleventh-hour witness comes forward to clear the accused. But his reporter's sense tells him there's more to this than meets the eye and when Rachel invites him to her house and suggests he also take a look at the write-ups of the other deaths, he starts an investigation of his own. His questions put a few noses out of joint and soon he's warned off by Inspector Oakes of Scotland Yard. Oakes has received word through mysterious channels leading to his superior. He doesn't really expect Flint to heed the warning...and he's right. Flint keeps on and finds himself framed up for murder. It's only through quick thinking on both his and Rachel Savernake's part that keeps the frame from sticking.

Also on the scent of mystery surrounding these deaths is Leonora Dobell, an eccentric female criminologist, who lives at Mortmain Hall on a secluded coastal estate in the north. She decides to invite those who have recently escaped the clutches of the law--as well as Rachel Savernake--for a weekend house party. She presents them with an audacious conclusion to her researches and then the house party ends abruptly when death strikes once again and their hostess disappears. Was the death the accident it appears or is part of a plan to commit the perfect murder?

This is the second of Edwards' Golden Age historical mysteries and I enjoyed it every bit as much as Gallows Court. Perhaps even more--because as I mentioned in my review of the previous book, the one slight quibble I had was a bit of a deficiency in fair-play cluing. I can't complain about that this time. The clues are all there for those who can catch them. And for those of us who can't, he has provided a "Clue Finder" section (as appeared in numerous mysteries written during the Golden Age) that shows us exactly what clues we missed. It was good to visit with Rachel and the Truebloods (her loyal servants/friends) and Jacob again. Rachel has her own style of investigations and justice which may not suit everyone, but I do appreciate her strength of character. And don't think that I've given anything away by mentioning the perfect crime--twice. The perfect crimes just may not be exactly what you think. A very fine addition to the series. ★★★★★

First line (Epilogue--which appears at the beginning): The man was dying. He knew it and so did Rachel Savernake.

First line (Chapter One): The ghost climbed out of a hackney carriage.

Deaths = 12 (one ran over by train; one drowned; two strangled; one beaten; one natural; one shot; one stabbed; two fell from height; one house collapsed on; one poisoned)