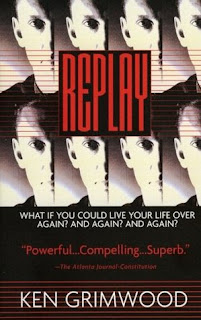 As the cover indicates, Grimwood's novel poses the question: What would you do if you could do it all over again? Or even just part of it? Jeff Winston, a 43-year-old radio journalist gets the chance to find out. In 1988, he dies from a heart attack while on the phone with his wife. But he immediately becomes conscious again and finds himself back at college in 1963. He's naturally disoriented at first, but quickly realizes that all his memories of the next 25 years are intact and begins to figure out how he can use that to his advantage. A few strategically placed bets and soon he...and his partner Frank are set for life. (Since Jeff was underage, he needed Frank to place the bets.) The two set up a company and begin making investments based on Jeff's "sense" of the market. Along the way, Jeff makes an effort to change history for the better--attempting to prevent the assassination of JFK by tipping the FBI off about Oswald. But it's all for naught...someone else does the job and history unfolds as if nothing had happened.

He even tries to avoid his own death in 1988 by living a far more healthy lifestyle. But when 1988 rolls around, he's hit with that same slam in the chest and finds himself back in 1963--just a few hours later than the last time. He goes through several rounds--trying various life-styles and producing small, but insignificant (in the grand scheme of things) changes. And then he meets a woman (Pamela) who is experiencing the same thing. They fall in love and then they try to find a way to have a happy ending. But the resets keep getting shorter and they don't know what will happen when there's no more time left to reset. Will there be a happily-ever-after after all?

I read this back in the late 80s, shortly after it first came out and absolutely loved it. I was deep in my science fiction mode at the time and I really enjoyed the theme of reliving your life and trying to get things right...or better. I absolutely would have agreed then that this was an award-winning book (as it was--World Fantasy Award 1988). This time--it just didn't hook me in the same way. I still can see that it was an influential book. You can see its stamp on Groundhog Day, for instance, and other stories where traveling into your own past is involved. At times, the writing is really, really good. But I did get  bogged down a bit in the various resets. They just didn't interest me as much on a second reading 30-some years later.

One thing that I did think about this time: Why was this happening? Was the point to make Jeff and Pamela realize how their choices affect their lives? And how exactly did it happen? There's no real attempt at explanation. It just happens. Because. I gave the book four stars when I first read it. ★★★ now.

First line: Jeff Winston was on the phone with his wife when he died.