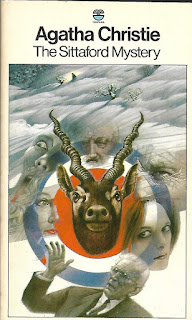 The Sittaford Mystery (1931) by Agatha Christie is a non-series mystery (no Poirot, no Miss Marple, not even Colonel Race). It opens at Sittaford House in a small village on Dartmoor. Mrs. Willett and her daughter Violet have rented the house in the country from Captain Trevelyan. The villagers all think it a bit odd that the ladies from South Africa would want to come to the middle of nowhere in the dead of winter--but there's no telling what foreigners will do, is there? The ladies are quite outgoing and issue invitations to call to all and sundry. Captain Trevelyan is a self-declared "woman hater" and refuses all advances.

But that doesn't stop the ladies from having regular dinners and little parties--even when it's snowing like no tomorrow. The story opens with one such party. Captain Trevelyan's long-standing friend, Major Burnaby, Mr. Rycroft. Mr. Ronnie Garfield, and Mr. Duke all brave the winter storm to attend. But due to the heavy snowfall, the Captain isn't expected to make it from Exhamptom--his current place of residence while the Willetts occupy his home. And he doesn't.

When it becomes apparent that they all don't play bridge, it's suggested that they indulge in a harmless bit of table-turning. It's all fun and games until the spirits suddenly tells the group that Captain Trevelyan is dead. The spirit's communication ends with a single word...M-U-R-D-E-R! At first they assume that one of the group is just playing a somewhat morbid joke, but there's a certain unease and Major Burnaby, who had declared it all "Tommy rot!" before they began, becomes worried. Since it's an evening that he and Trevelyan normally got together for chess and acrostics, he decides to venture out into the snow and walk the six miles to his friend's place.

When he arrives, he can't get an answer to his repeated knocks and peals of the doorbell so he drags the local constable and doctor away from their warm fires to help him investigate. They find the captain dead from blow to the head with a sandbag...and if the doctor's estimate is correct, he was killed at 5:25 pm--the exact time of the spirit's message. Inspector Narracott is summoned from Exeter to sift through the clues and suspects. All of the Captain's relatives inherit equal shares of his rather large fortune and all but one have alibis. When it's discovered that James Pearson was actually on the spot at the right time and that he has a very pressing need for cash, it looks like the police will have a quick wrap-up to the case. But Pearson's fiancée knows her Jim and knows that he couldn't possibly kill anyone. Not that he's a saint...but she knows what his limits are. So, she forges an alliance with a willing young reporter and sets out to prove Jim's innocence. It isn't long before she provides the police with broken alibis and a renewed cast of suspects.

An entertaining read from Dame Agatha. I spotted the murderer right away, but I'm quite sure that was because I've read the novel before. I know that I didn't figure it out the first time I read it. And I'm pretty sure who I chose as suspect #1 before, because s/he tempted me into changing my mind again this time around. This is classic Christie with several possible solutions, red herrings galore, and all the clues on display. I gave the story four stars the first time I read it and I give it ★★★ and a half now--only because she didn't quite fool me on the re-read. She very often does--if enough time has elapsed between reads.

First line: Major Burnaby drew on his gum boots, buttoned his overcoat collar round his neck, took from a shelf near the door a hurricane lantern, and cautiously opened the front door of his little bungalow and peered out.

Definitely a Christie I feel I need to re-read, even though I can remember who did it and why, (such a wonderful motive in its niche-ness).