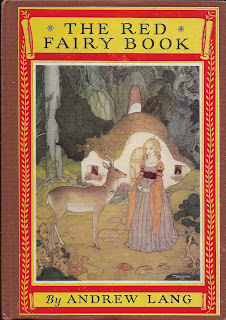 The Red Fairy Book (1890) by Andrew Lang (ed) is the second in Lang's series of "color" fairy tale collections. Lang was a Scots poet, novelist, and literary critic who began collecting these tales in the late nineteenth century in order to conserve "the old stories that have pleased so many generations." The stories include well-known classics such as "Jack and the Beanstalk," "The Twelve Dancing Princesses," "The Golden Goose," and "Rapunzel" as well tales that I had never heard of--like "The Death of Koschei the Deathless" and "The Nettle Spinner." There are also several variations of the Cinderella story that I'd not seen before. His stories transport us to a magical land full enchanted forests and isolated castles where trolls, giants, and fairies can be found.

As a child growing up, I loved those magical worlds. My grandma had given me Lang's first book of fairy tales, The Blue Fairy Book, and I loved it. I reread it more times than I could count. I had no idea then that there was a whole rainbow of other fairy tale books that I might have read as well. So, in 2015, when I found The Yellow Fairy Book at our Friends of the Library used book store, I was super excited. Except--it wasn't exactly Lang's book. Some dude by the name of Brian Alderson had edited Lang's edited book. And I found it rather disappointing (to see why--check out my review by clicking the title.) So...when I found a vintage copy of The Red Fairy Book at our annual community book sale a few years later, I snatched it up, hoping that this time the reading experience would be much closer to what I had when reading The Blue Fairy Book.

There are a number of selfish and mean characters in these stories--from the usual evil stepmothers to disgruntled fathers and kings. There are also good-hearted, kind princesses and princes and children who are willing to withstand the hardships flung at them by others. Sometimes, they don't even really notice that someone is being mean to them:

As King Grumpy was not used to being contradicted in anything, he was very much displeased with his son, and ordered that he should be imprisoned in the tower that was kept on purpose for rebellious Princes, but had not been used for about two hundred years, because there had not been any. The Prince thought all the rooms looked strangely old-fashioned, with their antique furniture, but as there was a good library he was pleased, for he was very fond of reading....

Hey, if I had to be imprisoned and there was a good library handy, I might not mind too much either.

The stories here are definitely more like what I remember of The Blue Fairy Book and I have to say that I did enjoy this older edition of The Red Fairy Book more than the updated Yellow--but I can't say I'm as enchanted with it as I was when I was young. There's something about being a child and reading fairy tales that just can't be reclaimed in my fifties. When I was a child I would have blazed through this book, now it took me several days to finish. An enjoyable read, nonetheless, and I'm very glad to have found another of the color fairy editions. ★★★★