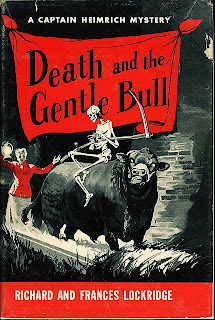 Death and the Gentle Bull by Frances & Richard Lockridge finds Captain Heimrich investigating an unusual murder--death by Angus bull.  And not just any Angus bull...a reputedly gentle International Grand Champion bull worth about a quarter of a million dollars (in the 1950s!).

The bull in question belongs to champion breeder, Margaret Landcraft--a woman used to getting her own way and in so doing has often rubbed others the wrong way.  It appears that she has irritated one too many.  Margaret hosts a party on the eve of a grand sale of some of her prize Angus beef cattle, but she won't live to see any profits. She is found battered to death in the stall of her prize bull and it looks for all the world as if she must have irritated him and driven him to crush her against the walls.

But State Trooper Ray Crowley doesn't quite believe it and neither does his dad.  Both know cattle--not quite on the same level as the Landcrafts, but they still don't believe that the gentle giant would have turned on his owner. Crowley takes his doubts to Captain Heimrich who soon doesn't believe it either.  And when photographs taken by the Life magazine crew (there for the sale) prove that the bull must have been used by someone to kill the headstrong cattlewoman, Heimrich and Crowley get down to the business of finding out just how someone could commit death by bull.  As the district attorney says, it's the "biggest blunt object I ever heard of. A ton or so of bull, used as a murder weapon." (p. 87)

This is another fun, light mystery by the Lockridge team.  The murder method is ingenious--if perhaps a little unlikely.  But don't let that spoil your fun.  You can always count on the Lockridges for quirky characters and a fun mystery.  Not meant as heavy-duty, clue-laden, in-depth puzzlers, but perfect for an easy afternoon read. As a little bonus, they have a way of writing about animals that give cats, dogs....and bulls a lively personality of their own without making them too human.  Not my absolute favorite Heimrich story, but a good solid three stars.

Labels: 150 Plus, Embarrassment of Riches, Mount TBR, Off the Shelf, Outdo Yourself, Vintage Mystery Challenge, What An Animal

I just finished reading the first one of this series and found the prose dry. Have you read it? Is it just that it is the first in the series? Do you have a recommendation for another one to try instead?

Actually, it was the Norths' first book that I just read, but the question remains the same. Should I try more, or try this series instead?

This one sounds really interesting, Bev and I love the cover. I grew up around bulls and rodeo so this might be a lot of fun.

Level 1 Homemaker: Hmmm. I'm not sure that it will make a difference. The Lockridge style doesn't change a whole lot from series to series--I don't find them particularly dry, but I do think (like many authors)they find their writing feet, so to speak, after they get a few books under their belts.

I love the cover, and love the idea of using a bull as a murder weapon.

Ryan: It is a cool cover. And it's interesting how the culprit manages to use the bull to commit the crime.