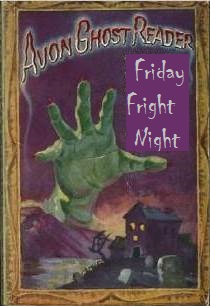 Well, here we are--the last Friday of the month and the last edition of Friday Fright Night. At the beginning of October Curtis Evans from the The Passing Tramp put out the call to his fellow bloggers to take part in a month-long event to get us ready for Halloween. Each Friday has found bloggers across the internet as well as familiar faces from the Tuesday Night Blogger crew serving up ghastly delights These are being gathered on up on the Golden Age of Detection Facebook page, but if any of my readers would like to join the fun you are welcome to leave a link in the comments and I'll see that Curtis gets it.

Last week I ransacked my Goodreads book list (the easiest to sort) and presented you with a sampling of Halloween-Themed Titles from my read and/or to-read lists along with a little quiz to see if you could match authors and titles. As promised, the answers will appear at the end of this post. This week I present a word search based on that post on Halloween-Themed Titles. In the puzzle, you will find one word from every title mentioned in my previous Fright Night post as well as the last name of each author referenced. Each word will be used only once--for instance,(The) Mystery of the Skeleton Key and The Skeleton Key have duplicate words. So "skeleton" and "key" (if used) may only appear once. Similarly, authors who have more than one title in the list only appear once in the puzzle. If I have done my job correctly and you have found all of the correct words (65 total), then the remaining letters will spell out (in order) the names of the blogs that have participated in our Halloween adventures (twice each)--followed by a suitable holiday message. There should be one random letter left over at the end. 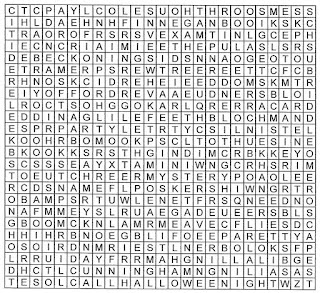 Clicking on the photo will enlarge the grid. If you would like a file to down load and print, you should be able to access it HERE.

And now for the answers to last week's quiz.