Death of a Warrior Queen 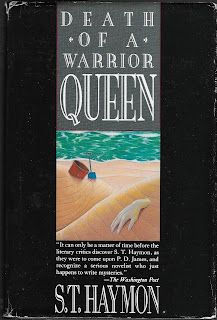 Death of a Warrior Queen (1991) by S. T. Haymon
Detective-Inspector Ben Jurnet is overjoyed that the love of his life, Miriam, has returned to England after a year spent in Israel. He's not sure exactly where the relationship stands, but he knows he just wants to be with her. When he gets an invitation to examine an archaeological dig in the Lanthrop area in order to give advice about how best to protect any finds, he decides to turn it into a picnic holiday with Miriam. After a brief stop at the archaeological site, the venture to a lovely strop of beach along the sea. There's even a handy little hide-away in the dunes for lovers to get reacquainted.
All is going well--in fact, even better than Jurnet expected--until their activities unearth a brown, leathery hand attached to a very dead body. Jurnet is hastily turned from ardent lover to cop on a job and his task is to find out who wanted Annie Chance dead. All indications were that she had packed everything she owned and planned to leave town (leaving her adult, but somewhat backward son behind) and some say she was leaving with traveling sales rep. Her suitcase is missing and there's no sign of the sales rep. Annie wasn't the most pleasant of women--so there are a few suspects in the village as well, including her son who may have gotten tired of her blows, both verbal and physical. Annie's isn't the only death in Lanthrop--but Jurnet will have to determine if an auto accident, an apparent suicide, a death from AIDS, and/or the slaughter of a herd of goats have anything to do with Annie's murder.
I have to say that I was disappointed with this one. I had read the first five Haymon mysteries in the late 80s/early 90s and found Ben Jurnet to be an interesting detective. The mystery plots were all solid--nothing extraordinary, but they were well-plotted and were good for a day's read. Reading the sixth installment about thirty years later, Jurnet is still an interesting and well-drawn character, but I wasn't all that keen on the plot. I found the motive for murder to be rather bizarre and, well, tawdry [explaining would be a MAJOR spoiler]. And, yes, murders are often tawdry in real life, but I don't generally want my fiction experiences to leave me feeling so icky.  ★★
Quotes
First line: They came to the coast by narrow roads that snaked between fields of barley and heathland where the bracken along the verges bent to the stir of the car's passing.
But things that change your life, I've discovered, don't have to be showy or dramatic. They can be so small that when you look back at them afterwards, it seems incredible such little things could have such colossal consequences. (Hannah Millburn; p. 41)
You could say that she was the one who put the whole idea into my mind. I mean, if somebody suddenly makes it plain that they think you capable of things  you never suspected you were capable of, well, you begin to think perhaps you are, if you take my meaning. (Endymion Mobbs, p. 175)
Last line: Dazed with joy, he watched the door slowly opening.
***********
Deaths = 5 (2 car wreck; 1 natural causes; 1 stabbed; 1 hit)
Posted by Bev Hankins at 10:59 AM