The Revenge of the Wizard's Ghost 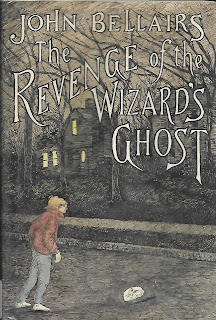 The Revenge of the Wizard's Ghost (1985) by John Bellairs is the fourth in a series of middle grade Gothic mystery/adventure books featuring thirteen-year-old Johnny Dixon and his friends, Professor Childermass and Fergie. In the previous story (The Spell of the Sorcerer's Skull), Johnny had helped break a spell that held the professor helpless. But now the wizard has a bone to pick with the boy who spoiled his plans and sends the evil ghost of one of his relatives, Warren Windrow, to possess young Johnny.

The professor calls on one of his friends, a priest, to perform an exorcism, but the evil spirit proves too strong. So, it's up to Professor Childermass and Fergie to discover the means to save their friend. Research into the Windrow family history reveals that the source of the wizard's power comes from ancient Jewish artifacts that are rumored to be buried on the family's abandoned estate. But they will have to decipher clues relating to the final resting place of one of the Windrow family. Will they be able to find the artifacts in time to save Johnny...and themselves?

This is the first book that I have read by Bellairs--I somehow missed him when I was a young reader. I noticed that many reviews on Goodreads say that this is not Bellairs at his best. But I must say that I thought this a very nice middle grade book and I'm quite sure I would have loved it when I was young. I love the cover illustration and frontispiece by Edward Gorey. I enjoy the three main characters, even though we don't see as much of Johnny since he spends a great deal of time possessed or in a coma-like condition. And the action that takes place in the gloomy Windrow mansion is good and spooky. The only real issue is the ending--the way the artifacts are employed in order to save Johnny is a bit of a let down. After the wizardry that goes on in the house, one might expect a little more pizazz in the rescue. So, I'll give this one ★★★ and a half.

First line: No! No! Keep then off me! Keep them off!

Last line: Reaching into his other coat pocket, he took out another cigarette box, opened it, fished out a real cigarette, and lit it while everyone laughed.

I enjoyed most of the John Bellairs books. I was collecting them back in my rabid Edward Gorey phase when I'd buy anything with a Gorey cover. The ones written by Brad Strickland after Bellair's death featuring continuing adventures of Bellair's characters are less imaginative, I think, and more derivative and reminiscent of "spoooky" juvenile fiction.

John, I can't figure out how I missed these when I was young (at least the earliest ones). I was all into spooky fiction when I was in elementary school and read all the Hitchcock collections that our library had.

And...isn't that the way with continuation books? In general, it's hard to find books written by someone else that really do justice to the original author's characters/vision. I think of the Lord Peter Wimsey books (which I cannot resist reading even though they don't come close to Sayers) and Sherlock Holmes. At least with Holmes, there are lots of people doing new stories, so it helps that you can avoid the writers who just don't get it right. When just one author is authorized by the estate, that makes it more disappointing when they're not good.

I have loved John Bellairs for many years and we've collected his books. I'm quite fond of this one...but I'm also ridiculously fond of any of them.