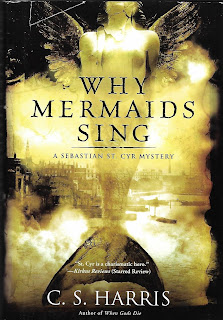 Third in the Viscount Devlin (Sebastian St. Cyr) Regency-era mystery series. It's now September 1811 and Sir Henry Lovejoy once again approaches Devlin for help with a gruesome series of murders. The sons of some of the wealthiest families in London have been found slain--their throats cut, portions of their bodies mutilated, and strange objects stuffed in their mouths. The young men have obviously been killed elsewhere and then dumped in prominent public places--someone wants their handiwork to be seen. But then a merchant captain's son and the son of a country parson are also killed. The Bow Street Runners (who take over the case) claim there is no connection--but Devlin is sure it's all part of a deadly serious pattern.

The first connection he finds is to a John Donne poem, "Song: Go and catch a falling star." The items found in the young men's mouths all come from the lines of the poem. Next, he finds that the fathers of all the young men were survivors of the doomed last voyage of Captain Edward Bellamy's ship, the Harmony. The fathers all behave as if they have something to hide and definitely don't want Devlin to investigate. So, he becomes convinced that something dreadful must have happened on that ship. But why kill the innocent sons who weren't even born yet? Once Devlin can answer that question, he'll be on his way to finding out who is behind the murders haunting London.

This is another really well-done mystery on the part of Harris. It doesn't claim to be in the Golden Age tradition, but the clues truly are all there and one could (despite the fact that one didn't) figure it all out before Devlin did. Lots of action and adventure and twists and turns to keep the reader on her toes. It's not easy to use the "murderer following a rhyme or poem or song" theme and make it work--but Harris does. There is a very logical (to the murderer) reason for the use of the Donne poem and it's not overdone.

I honestly had forgotten how gruesome this series could be. Fifteen deaths is a pretty high body count and the deaths are not pleasant. Not that murder ever is, but these are particularly nasty. Of course, one understands why after the motive is revealed and the fact that the method of murder follows on the precipitating event makes it easier to have read. I think one reason I remembered this series so fondly is because Devlin is such an interesting and well-drawn character. The struggles he faces both in his investigations and in his personal life are very realistic and bring the reader firmly into Devlin's corner. We want him to succeed in his investigations and we want him to succeed privately.

There is a whole sub-story of mystery revolving around Devlin and his missing mother as well as Devlin and his lover, the actress Kat Boleyn. New twists keep appearing and I for one am eager to find out where Devlin goes from here. He's dealt a pretty devastating blow at the end of this one...but maybe there is hope for a happy ending eventually. ★★★★

Last line: And still he sate there, until the last of the day faded from the sky, and the lamplighter on his rounds set a flickering flame to the oil lamps in the square.

Deaths (including those contributing to the motive and resulting from catalytic event that started it all) = 15 (seven stabbed; one hit by sailing vessel; two drowned; two hit on head; one fell from height; one alcohol poisoning; one natural causes)

Thanks for the review, and the observation that the puzzle is quite Golden age - the fair-play use of clues and the rhyme/poem - has caught my eye. :)

Would you say that the previous two titles in the series are also fair-play mysteries? And would the novels need to be read chronologically - rather than, say, trying out this one first?

Jonathan: If you want to follow along with the personal mysteries in Devlin's life, then reading in chronological order will be helpful. If that doesn't matter to you so much, then you could dive in here without any trouble.

The first two are okay in the fair-play area, but I think Harris begins to hit her stride here.