Murder on the Eiffel Tower 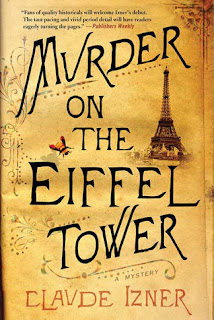 Murder on the Eiffel Tower (2003) by Claude Izner (Liliane Korb & Laurence Lefevre) is the debut novel in a historical mystery series set in France at the end of the 19th Century. As the title would indicate, it revolves around a set of murders that occur on the Eiffel Tower, at the 1889 World Exposition where the tower was unveiled, and to others who had visited the tower during the Exposition. The first death to attract major attention (though, not precisely the first of the string of murders) occurs on the upper platform. An inoffensive poor relation who had escorted her niece and nephews to see the sights and exhibits dies suddenly from an apparent bee sting.

Several similar deaths occur and a brand new newspaper Le Passe-partout manages to scoop the other papers each time. Marius Bonnet and his team of journalists are on the spot (having a luncheon at the Tower's cafe) when poor Eugenie Patinot dies and they make the most of it. And even though the police keep insisting that bees are the culprit, the paper keeps hinting that a murderer is loose among the exhibits.

Victor Legris, a friend of Bonnet, is a bookseller and literary man who has been invited to the luncheon and to contribute literary articles for the paper. He soon notices that various people, including his mentor and business partner Kenji Mori, seem to be on the spot each time a new death occurs and begins to investigate on his own. He sets out initially to prove that Mori couldn't be involved in such wickedness but the more he discovers the more unsure he is. But his other main suspect doesn't make him any happier. Through the newspaper, he has met the beautiful  Russian illustrator Tasha and begins to fall in love with her. But...she also has been in the vicinity each time death has struck and there are certain clues that he thinks could well point to her. It isn't until someone tries to eliminate Victor and carelessly leaves behind a most illuminating clue that he begins to see the real plot. He'll need to rush back to the Tower--but will he be in time to prevent one more death?

This is another middle-of-the-road read for me (I seem to be on a string of those). There were enough clues that, had I paid proper attention to them, I could have figured things out before the reveal. The setting is charming and I found the descriptions of both Paris in the late 1800s and the World Exposition in particular to be quite entertaining and interesting. The murder method, plot and motive were all interesting as well. I wish I could say as much for Victor as our protagonist. He really is something of a goop and certainly isn't a born detective. He is all set to suspect the man who has served as a substitute father and his mentor of murder on the flimsiest of evidence. Then he's ready to suspect the woman who he's falling in love with on...well, not flimsy evidence, but very ambiguous evidence. And he's so wishy-washy about it all. One moment he's certain she did it and is clumsy enough to let her see it--making her mad if she's innocent and tipping her off if she's not. The next moment some other tidbit comes along and he's quite sure and hugely relieved that she didn't do it. He sortof recognizes that there are other suspects, but for about 80% of the book he's too busy being worried about the people he cares about to really work on figuring out whether somebody else is the murderer.

The characters with the most interest for me are Joseph, the bookshop assistant, and Tasha, the beautiful artist (though I don't get why she keeps letting Victor come back after every episode where he pretty much accuses her of being a heartless murderer...). Joseph has way more brains than Victor and could probably have identified the killer at least three murders earlier if he'd had access to all the clues his employer had stumbled across. But poor Joseph, he's stuck in the bookshop dealing with obnoxious lady customers while Victor bumbles picking up clues that he doesn't really recognize the significance of. And Tasha is an intelligent, independent woman. Although she has this overpowering attraction to Victor (that's the only explanation I can come up with for why she keeps allowing him back), she's set on keeping her independence even when the murders are all solved and he wants her to marry him (or at least live a lot closer to him in a nicer apartment).

It would seem that the Izner books focus on Victor as an amateur detective and I have picked up several more in the series. I'm willing to give the series another look. I hope that Victor's skills as an investigator improve and become as interesting as the setting and plot. ★★★

First line: Storm clouds raced over the barren plain between the fortifications and the goods station at Les Batignolles, where the scrubby grass smelled unpleasantly of sewers.

Last line: Before they left she looked around happily at the untidy room: she had uncovered the dormer and sunshine was now flooding in.

I have the first three in this series on my shelves. Now that I've read your review, I'm reminded of them and they need to be on my Mount TBR list for next year. Thanks for the push up the hill!! :)

Thanks, Sue. Yeah--most of these have been sitting on my shelf for quite a while now. I thought it was about time I tried out this section of Mount Everest. :-)