The Mystery of the Skeleton Key 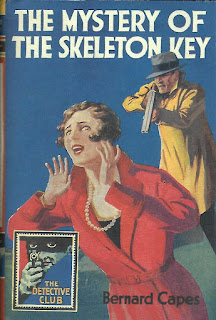 The Mystery of the Skeleton Key (1919) by Bernard Capes
"What about your average inventive intelligence, Baron?"
"I said, specifically, a man's," pleaded Le Sage. "Women, fortunately for us, are not eligible for the detective force."
The main action of our story takes place at Wildshott, the Hampshire seat of the Kennetts, though it opens in France and the tragedy has its roots there as well. Sir Calvin and his son have each invited friends down for the weekend. Baron Le Sage will be on hand to offer Sir Calvin a battle at the chessboard and Hugo Kennett has sent an urgent message to his friend, Mr. Bickerdike begging for his assistance in some mysterious problem (Kennett is apt to blow minor contretemps into major catastrophes). Also among the party throughout the weekend are Sir Calvin's daughter, Audrey, and their neighbor Sir Francis Orsden, Audrey's ardent admirer.
Tragedy strikes after shooting party attended by the young men when the body of one of the maids is found shot to death on a deserted pathway. Hugo had stopped to light a cigarette and exchange a few words with the young woman and carelessly left his shotgun leaning against a tree. Suspicion focuses on various members of the household from the Baron's valet who fancied himself a romantic conqueror to the butler who had considered the girl his until the Gallic casanova came along to Hugo who had dallied with the girl himself. Le Sage may seem to be nothing more than a genial houseguest intent on a game of chess with his host, but the clever young Sergeant Ridgway who is assigned to the case soon finds that chess strategies aren't the only puzzles the baron can unravel.
Bickerdike, who comes across as a very pompous young man, also tries his hand at sleuthing, but fastens his attention on the Baron. He has thought there was something not quite right about the man from their first chance meeting in Paris (in our opening scenes). He noticed immediately that "[the Baron] could not, or would not, answer a direct question directly; he seemed to love secrecy and evasion for their own sake, and for the opportunity they gave him for springing some valueless surprises on the unsuspecting." Bickerdike also observes his man behaving most peculiarly late one night in Sir Calvin's study and definitely suspects the worst.
This may have been quite thrilling back in 1919 when it was published and folks were a little more used to the style of writing and hadn't already encountered a similar solution. But Capes takes a long time to get where he's going with some of his paragraphs. It's particularly rough going when we're getting the point of view of Bickerdike--who keeps his journal in the same pompous style as he conducts his social interactions. I much preferred the third person sections of the novel. I'd say that this mystery is definitely for those who have a deep affection for early British detective novels and who can appreciate the early forms of their beloved mysteries.
The solution didn't come as a surprise to me--I thought it was telegraphed pretty plainly even though there weren't any real clues that the reader was allowed to see. Baron Le Sage follows in the footsteps of Sherlock Holmes and keeps what clues he finds very close to his chest* so there isn't any way to spot the criminal except through inference--but, for all that, I do like the character of Le Sage and wish that Capes had lived long enough to provide us with some more adventures. ★★★
Kate over at crossexamingcrime has also reviewed this one and has given it a similar rating.
*Like the titular skeleton key, for instance. I kept waiting for it to show up. It doesn't make an appearance until the big reveal at the end.
Quotes
First line: Some few years ago, in the month of September, I happened to be kicking my heels in Paris, awaiting the arrival there of my friend Hugo Kennett.
I had expected from him, on her disappearance, some significant look or gesture, betokening his acceptance of the inevitable conclusion; but he made no such sign, and merely resumed his business conduct of the case. He knew better than we, no doubt, that in crime the most obvious is often the most unreliable. (p. 57)
But Audrey was prejudiced against him, and the prejudices of young people are like their loves, unreasoning and devastating. (p. 156)
Are we not a little apt to judge a man by his business--as that a lawyer must be unfeeling, a butcher cruel, a doctor humane, and a sweep dishonest? But it is not his profession which makes a man what he is, but the man who makes his profession what it appears to him. A lawyer does not appropriate trust funds because he is a lawyer, but because he is a gambler...a detective is not impeccable because he is a detective, but because he is an honest man. (Baron Le Sage; p. 175)
Last line: Now let us talk of something else.
***********
Deaths = 2 (one shot; one natural causes)
Posted by Bev Hankins at 11:33 PM

Meanwhile, in the last pandemic ... Wikipedia says "[Bernard Capes] ... died in the 1918 'flu epidemic. A memorial plaque commemorating his life is in Winchester Cathedral (where he worked in the years leading up to his death), affixed to the wall by the door which leads to the crypt. Thanks for the review!

Yes, I had noticed that--how ironic that I've read an reviewed his last book during our current pandemic.