Shadow on the Wall 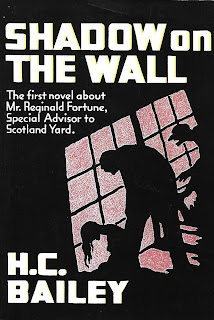 This is the first full-length novel featuring Bailey's doctor-detective, Reginald Fortune. Fortune is a country doctor at heart, but acts as a special advisor to Scotland Yard. The story opens with the good doctor giving the final verdict on a young society matron's death--suicide, no question. His friend Lomas, Chief of the Yard's C.I.D., thought something seemed vaguely off about the situation but when Fortune tells him that there is no doubt about suicide he is ready to wash his hands of the case. Fortune sees it as a beginning to more deadly things, however, when the woman's husband, a pilot, dies in an aircraft accident that could well have been a suicide as well. He's particularly disturbed when the couple's young daughter receives a nasty note indicating that there was more to mummy's death than met the eye.

The scene then shifts to Lady Rosnay's house and garden party--a party that she practically begged Fortune and Lomas to attend. The doctor obliges and is met with gossip and scandal swirling about the name of Poyntz (the couple in question) and a certain up-and-coming member of Parliament by the name of Simon Osmond. There are whispers about women and drugs. Lady Rosnay's granddaughter Alix is in love with Osmond and means to marry him and Lady Rosnay means that she shouldn't. Then the old lady tumbles downstairs and Fortune finds her bruised and missing her tiara while footsteps run away and a man's shadow flickers on the wall. Murders soon follow, a drug ring tied to a perfumier on the continent is discovered, and it becomes clear that Osmond is implicated--but is he an active participant or is someone trying to get him out of the way? Is the target really Lady Rosnay or is someone trying to derail Osmond's political career?

Fortune is convinced that he and the Yard are being forced to see what the opposition wants them to see: "we're only seeing what's arranged for us and the shadows of the people behind." It isn't until Fortune takes the offensive and makes the deadly mischief makers react to his moves that he begins to see the pattern behind the spree of killings; a pattern that includes the shadow flickering on the wall, a girl who dies from morphia tablets that were not what they seemed, a perfume labelled Le Matin d'un Faune, and a dead monkey. He has a bit of a job making Lomas believe that it is all connected--even the Poyntz suicide--but the Yard man can't deny the logic once Fortune's case is made.

On the whole, I found this full-length Fortune adventure to be a bit of a toss-up. On the one hand, I quite liked the set-up--most of the deaths are arranged to look like suicide and accident. And, but for Mr. Fortune, they might have passed for such. Of course, once Fortune gets involved and takes the offensive the murderer gets flustered and the deaths get a bit more messy (and more obviously murder). But, initially, it is interesting to watch Fortune try to make a case to Lomas that there is an evil guiding hand behind all these deaths. Just following this storyline is quite absorbing and interesting.

The primary distraction from the plot is Reggie Fortune himself. If there was a single page where he was not moaning or described as plaintive, I'm afraid I missed it. It really is quite annoying. I don't recall his plaintive personality getting in the way so much in the short stories I've read and I honestly think he's best suited to that medium. In this, I apparently agree with Dorothy L. Sayers who said of Fortune in her May 6, 1934 review, "Mr. Fortune moans and mumbles even more than usual over this perverse series of villainies, and, on the whole, his eccentricities of manner seem best suited to the short-story form...." She does go on to say that "his swiftness and sureness of psychological deduction carry him triumphantly through the intricacies of the longer plot and keep the interest well sustained." And I also agree that despite his plaintive moaning and mumbling I did stay interested right through to the end.

The other difficulty with the plot is also mentioned by Sayers. When the final reveal occurs, both she and I felt that the psychology of the motive was a bit lacking. Not only (as Sayers says) was there little indication of the motive throughout the book, resulting in a lack of fair play for the reader, but I also found it difficult to believe in the motive when it was presented. Of course, that may have been precisely because I hadn't been prepared for it throughout the story and so there was no "Ah, so that's why so-and-so did this or said that" moment. We just don't see the person in question displaying any behaviors that make the motive make sense. ★★★

First line: The history of this war may most lucidly begin with a certain garden party at Buckingham Palace.

I was surprised to see a review of a Reggie Fortune novel. I've was reading some of the short stories recently, and it seems like they've fallen somewhat off the radar as of late, which is a shame as I think that they're quite excellent. The novels appear to be even less read, though that may be because they're getting harder and harder to find.

The plot sounds like it would make for an excellent read. The idea of a meticulous criminal slipping up as Fortune closes in also shows up in the story "The Business Minister" from "Call Mr Fortune."

It's a shame that this novel neglects to play fair with the reader, especially as the short stories are usually pretty good in that regard. And that the issue would be with the motive, which is often the strongest part of the stories, or at least the ones I've read. I can see how Fortune's mannerisms could start to grate on one's nerves over the course of a full novel.

Thank you for the excellent review. I've been thinking of checking out some of Bailey's novels once it's safe to return to the library, and now I know that this is probably not the one to start with.

I've just read one of the short stories you mention, The Little House, and thought it was superb. I'll give one of the novels a go at some stage though I have a low tolerance of moaning and muttering.

The plot itself was quite good. I do wish the motive had been as strong. I'm not sure how easy other full-length Fortune novels will be to find...but I'd like to see if they get better.

Now THAT is what I call a cover!