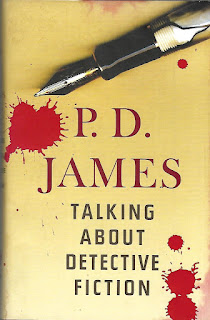 A somewhat disappointing overview of primarily British detective fiction from a highly respected recent author in the genre. Disappointing in several ways. First, don't read this if you haven't read all of Agatha Christie and all of Josephine Tey and a smattering of others. James, who ought to know better, spoils several plots in her meandering walk through the Golden Age of murder mysteries. Some of her spoilers are mere references, but she comes right out and tells you whodunnit in Christie and the main plot point in Tey. Second, although she claims to have enjoyed these Golden Age authors, she comes across as slightly condescending towards them--all those delicate sensibilities of the Golden Age who had their murders decently off-stage and dealt in very little blood and violence; little depth to the characters (meaning that we didn't get to see all the motivations which drove the evil-doer to do the wicked deed). But then she turns round and decries the current trend towards angsty detectives with all sorts of emotional baggage and background, saying how it would be refreshing to have a nice, dull, happily-married detective instead. [I thought she was plumping for interesting characters? I guess she means suspects and not detectives.] Third, unless you're brand-new to the detective genre, she doesn't really have much new too say. Which may seem contradictory to my statement that you shouldn't read this unless you have read a fair amount in the field. That's part of the problem--a book of this sort should bring new insights into the genre, especially having been written by an author, without spilling the beans on her colleague's work. I mean--if you haven't already read The Murder of Roger Ackroyd, why would you bother to do so after James told you straight up who did it? There are many other books that have come before [and since] that have provided fresh insights and interesting information on mysteries while avoiding spoilers--or, at the very least, when spoilers seem necessary, giving fair warning to the reader. I'm really a bit baffled why this book won both a Macavity and an Anthony Award for Best Mystery Nonfiction and Best Critical Non-Fiction when it contributed so little in fresh material--unless it was simply the name of the author.  ★★