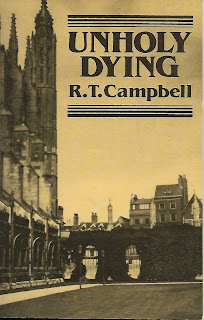 I am not a policeman but as an avid reader of detective stories, I don't want anyone to be wrongly suspected if I can help it. [Professor John Stubbs; p. 36]

Unholy Dying (1945) is the first of a series of mysteries featuring Professor John Stubbs, the larger-than-life botanist-cum-amateur sleuth, by R. T. Campbell. This initial outing is told primarily from the point of view of Stubbs' "Watson," his nephew Andrew Blake. Blake, who earns his keep selling "culture" pieces to the Daily Courier newspaper, has joined Stubbs at a formal Congress of geneticists where he is expected to come up with interesting stories on such things as blood groups and taste tests. But soon something far more exciting than genetic presentations happens.

Dr. Ian Porter, a vastly unpopular scientist who is well-known for stealing the ideas of others, is found dead from cyanide poisoning in the middle of the taste-testing exhibit. Pretty much everyone who ever met the man disliked him and had a motive to murder him--from Dr. Stubbs himself to Porter's unfortunate assistants to fellow scientists in his field and even Blake has the police's interest as a suspect. Ever the knight-errant, Blake had taken a swipe at Porter the evening before when the scientist pushed his unwanted attentions on one of his students, the lovely Mary Lewis.

Mary, of course, is also a suspect having had to fend off such advances repeatedly with more and more evident dislike. Her current beau, Dr. Peter Hatton naturally hates Porter for making Mary's life so uncomfortable. There is also the American Dr. Swartz who has even more reason to hate Porter. While in the States, Porter had snagged the affections of the girl Swartz loved and then promptly dropped her like a hot potato when she found herself "in trouble." She couldn't bear the heartache and dishonor and shot herself. And finally, there is Dr. Silver, Porter's right-hand man. Silver claims to be devastated and to have been Porter's only friend--but he was also in the position to have had the most intellectual property stolen.

The police in the form of Inspector Hargrave provide the foil for Professor Stubbs' efforts at amateur detecting. In fact, Hargrave makes a pretty poor showing for the official force, repeatedly wanting to arrest people on the slimmest of suspicion. Fortunately, Stubbs is digging up honest-to-goodness clues and is able to lay a trap that will catch the real villain of the piece.

So...my reading log tells me that I read this once back in the mists of time, but I honestly don't remember a thing about the book. Which is actually a good thing--I got to approach this absolutely delightful and funny mystery as if I were reading it for the very first time. I love collecting good quotes from the books I read but I would be copying whole pages at a time if I tried doing that with this one. But I will give a small selection at the end of the review.

Stubbs is a wonderful character. I can't imagine wanting to long be in the same room as a man described at various times as everything from an elephant to a tank and noted for hooting, shouting, rumbling, and "whispering" in one's ear loud enough to make the teeth rattle. But he is great fun on paper. Campbell's character descriptions in general are quite vivid and interesting. And his plotting was well done for a first attempt at mysteries. Most enjoyable.★★★★ and 1/2.


Quotes
Conversation in this car was an impossibility. All one could do was to hang on to the sides and hope for the best, thanking God that there was no boom to swing over suddenly and catch you a crack on the head when Uncle John brought her to, rather too suddenly. (p. 4)

Uncle John concentrated on his driving with the grim concentration of a chess player.  I have an idea that he really is rather frightened of it, but is determined that he will show it who is the master.  His idea of showing it consists of driving as fast as he can and braking just in time to avoid disaster. (Ibid.)

In a pub like this you should never get anything with a French name, it only covers the fact they are using up the things that were left over from yesterday. (Professor John Stubbs; p. 5)

[after a mini-lecture from Peter Hatton on genes and how everything we are is due to bits and pieces we've inherited from our parents and other ancestors...back to the primordial goo unless one is a mutant (freak)] I did not like to think that if I had any individuality it was the result of my being a freak and I told him so and he went on to wound my vanity even further by telling me that, after all, I was only something frothed up around an egg, by that egg in order to guarantee its continued existence. Having reduced me to the level of a milk-shake, I wondered whether the hot tea would not melt the froth but decided I would risk it. (p. 7)

I thought the whole affair was developing into a melodrama and, while I can stand my melodrama on the stage or in one of my favourite gothic novels, I do not feel comfortable when I am, however remotely, mixed up in it.... (p. 9)

[the janitor--when the police arrive after the murder] "Is one of you gentleman, Mr. Blake? Did you ring up for the police?" I assured him that I had indeed telephoned the police and his face cleared a little; anything, I could see, was better than that he should be the victim of a practical joker. (p. 28)

Like one of those crocodiles in which schoolgirls enjoy their ration of fresh air, we followed him. First came my uncle and Professor Silver, then Dr. Swartz and myself, his assistants, and Mary and Peter. One of the detectives walked at the tail of this procession, as if to see that none of us evaporated in the journey. (p. 29)

I think we'll go back to the White Lion. No one can interrupt us there, and you can give me a full list of your  indiscretions and misstatements, for I've no doubt but that you've been tyin' yourself  up in a net under the impression that you makin' things sound better. (Stubbs; p. 34)

Don't be afraid to tell me anythin' you like. I don't mind if one of you did murder Porter, but if you did  I hope you managed it in such a way that you won't be found out. [Stubbs; p. 36]

Now, then, I'll  make a list of everyone that we know about at present, just to see who had the opportunity, motive and so on to murder Porter. I'll put myself at the top of the list so that no one can say that I'me being unfair. This business of making a list is common to many of the best detective stories, so I don't see why we should not follow their examples, do you? [Stubbs; p. 39]

Well, I don't know what you think, but for the present I'd like to keep our friend X out of it. He's such a strange chap, and he only appears in the worst detective stories when the author cannot hink of a way in which to link up one of the suspects with the murder, havin' provided him with too good an alibi. [Stubbs; p. 40]

I may tell you that I wouldn't bother to find Porter's murderer if he had not done his murder in such a way as to spread suspicion among several people, and general suspicion clings to the innocent no less than to the guilty if we can't prove the guilt of one person. [Stubbs; p. 45]

I told [the reporter from the Courier] that I was going to write up my notes on the [tasting and blood grouping] demonstration and he seemed to think they would make a popular article and one that would be of educational value as well, for the Courier liked even its murders cultural. The murder of a scientist among scientists would receive far more notice than the murder of a grocer by common burglars. [pp. 45-6]

Inspector Hargrave looked at him with the sympathy which one gives to an unfortunate lunatic who gives no real reason for certification, and Dr. Flanagan shook his head with the air of having known John Stubbs for a long time but of having rarely seen him as eccentric as he was now. [p. 51]

There's you reason for the murder takin' place at this congress. It's the opposite of the sealed room mystery, anyone could have done it and the murderer was trustin' to the fact of Porter's unpopularity to spread suspicion as widely as possible. [p. 66]

I've been readin' about murders, the most impossible murders, the more impossible the better, for donkey's years, and now I have a good plain murder dumped down under my nose with plenty of nice suspects, and I wan to be clever about it. I would like a murder of a man in a sealed room, so the only murder I get is the opposite of that. A man in a room to which about twelve hundred people have had free access. [Stubbs; p. 74]

Thanks for this informative and enthusiastic review. With the book available from Dover, I really have little excuse for not getting my hands on it.