A Bevy of Big Little Books

In a mad rush to try and reach the peak of Mount Everest (100 books) in my Mount TBR Reading Challenge, I decided to tackle the small stack of eligible Big Little books that had accumulated pre-2019. I have very fond memories of similar books that I owned when I was a young'un back in the day--specifically of Road Runner and the Lost Road Runner Mine. I'm pretty sure I had a few others, but I'm not as sure of their titles. So, now whenever I see these books at our annual Book Fair or for decent prices in used book stores I scoop them up. I nabbed another small set (not in nearly as nice condition, unfortunately) at this year's Book Fair--so they'll have to wait for another year's Mount TBR Challenge. Below is a brief run-down of the books read this year. They were all fun little reads and well worth it in nostalgia value.★★★  for each book. 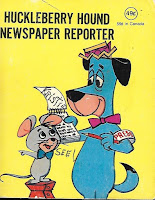 Huckleberry Hound Newspaper Reporter: Pixie and Dixie overhear the editor of the Bugle talking about how he'd like to hire a dog reporter to give him stories from the dog world. So, they convince Huckleberry Hound that he would be perfect for the job even though he has no experience whatsoever. After Huckleberry's first few failed attempts at newsgathering, Mr. Pastepot isn't sure that he's hired the right dog. But then Huck manages to get a scoop from a movie star's pooch that lands the Bugle a hot story on a kidnapping and--eventually--a spectacular rescue by Pastepot, Huck, and a few cowboys and their dog Tex. 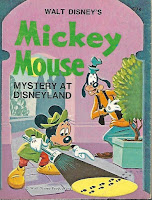 Mickey Mouse Mystery at Disneyland: The security chief of Disneyland has a puzzle on his hands. Small portions of food and tiny toy-sized furniture and tools have been disappearing from the restaurants and toy shop in the amusement park. He calls on Mickey and Goofy to solve the mystery of how the culprit is getting in and out of locked buildings--building that remain locked and sealed up tight even after the things disappear. The pair find a surprising answer in the miniature village in Storybook Land. 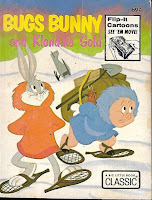 Bugs Bunny and Klondike Gold: When Porky Pig takes Bugs downtown for Frosty Fred's* annual gold coin give away, Bugs is bitten by gold fever. He schemes a way into Frosty Fred's mansion for himself and Porky and congratulates himself on convincing the man to tell him where to look for gold in Alaska. (After all, figures Bugs, Fred's so rich he doesn't need much more....) Fred agrees on condition that the boys give him a percentage of whatever they find. Bugs and Porky are in for more adventure than they bargained for when they uncover an underground kingdom that's so full of gold that the inhabitants consider lead (far more rare for them) to be of more value....

*Frosty Fred is a local millionaire whose generosity is well-known to all but Bugs apparently. 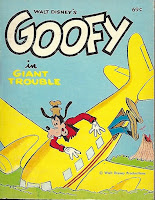 Goofy in Giant Trouble: In this outing Mickey and Goofy are working for the World Police Organization and are sent to investigate a garbled message received from a famous archaeologist who had been working in some ruins in the Tanga Straits. All that came though clearly was a mention of Black Pete (an old nemesis of Mickey and Goofy's) and that "activities indicate that a great menace is being established." Pete definitely has some diabolical plans cooked up. He's setting up a "country store" where all the bad guys will be able to buy smuggled guns. As Pete says:

I got great plans for all these goodies. When we get this load to the hideout, we'll have a regular country store for crooks, murderers and--heh--general no-good troublemakers....And the more trouble we peddle, the more customers we'll get. Dat's the way it is when everybody gets guns to use.

Along the way, Mickey and Goofy find an out-of-this-world gadget that can make Goofy grow to gigantic proportions. Fortunately, they're able to put this this to good use and foil Pete's plans before he can stir up too much trouble. 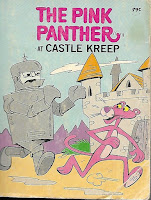 The Pink Panther at Castle Kreep: The Pink Panther is bored and in need of a vacation and a change of scenery--but when he confuses a plane ticket for Tinselvania for one to Pennsylvania he gets a bigger change than he planned on. Tinselvania is the home of all sorts of scary monsters--everything from the Fish Man of the swamp to the Weird-Wolf to Count Batula of the titular Castle Kreep and his newest invention, the clumsy robot Klankenstein. But these fiends are more bad-tempered than ghoulish and just need someone to show them how to solve their problems. Our friendly Panther manages to find a happy ending for all the monsters...and himself.

Labels: How Many Books, Mount TBR, Outdo Yourself

I read quite a few of these as a child back in the late 70s/early 80s. I remember the Pink Panther and the Goofy one. I remember Singa Songa Sixpence was one of the creatures Pink Panther meets (How I remember that after 40 years, I don't know!) And I used to read Mickey Mouse comics. Unlike the other Disney titles, they weren't funny short stories, but mysteries where Mickey and Goofy stop some serious villainy! I remember how Black Pete had a scientist kidnapped, and yet he was so hurt and betrayed when one of his men betrayed him! (Did he really expect honour among thieves?)

I also remember the Bugs Bunny one where they met a guy who thinks he's a medieval Knight on a crusade! And the Superman one where he fights the Phantom Zone villains!

Yes--I had several of these when I was young as well. Sounds like we're about the same age. :-)