Once again all the Santas in my life--from family to not-so-secret internet Secret Santas--have filled my Christmas stocking with literary delights. 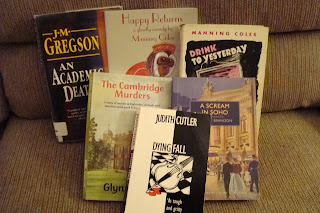 From my Golden Age Secret Kate Santa (those customs forms make it awful hard to stay secret), I had a package of goodies that included:

An Academic Death by J.M. Gregson; The Cambridge Murders by Glyn Daniels; Dying Fall by Judith Cutler (all three academic mysteries--with the Daniels book being a double-bonus, a vintage-era academic mystery!); Happy Returns by Manning Coles; Drink to Yesterday by Manning Coles, and A Scream in Soho by John G. Brandon. Santa took her cue from my TBF list here on the blog and spoiled me good and proper.

I was also spoiled by the Santas nearer to home with several bookish boxes under the tree. 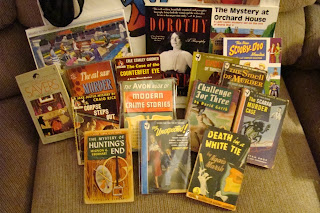 From Mr. & Mrs. Claus (Mom & Dad): Dorothy L. Sayers: Her Life & Soul by Barbara Reynolds and The Mystery at Orchard House by Joan Coggin (along with a mystery puzzle "Murder at the Museum" and a bit of mystery nostalgia in The (Almost) Complete Scooby Doo Movies with celebrity guests)

And from my very own personal Santa, Brad: Strong Poison by Dorothy L. Sayers (which wound up being a surprise because it was an edition that I don't own that I forgot I even put on my wish list); The Cat Saw Murder by D. B. Olsen; The Case of the Counterfeit Eye by Earl Stanley Gardner; Evidence of Things Seen by Elizabeth Daly; The Smell of Murder (aka The Gracie Allen Murder Case) by S. S. Van Dine; The Corpse Steps Out by Craig Rice (edition upgrade); The Avon Book of Modern Crime Stories by John Rhode (ed); Challenge for Three by David Garth; The Scarab Murder Case by S. S. Van Dine; The Mystery of Hunting's End by Mignon G. Eberhart (in an edition I've long been looking for); Unexpected! by Bennett Cerf (ed); and Death in a White Tie by Ngaio Marsh (again, an edition I've long been looking for). All but one of these are in those lovely little pocket-size editions that I adore.

I must have been a very good girl this year. 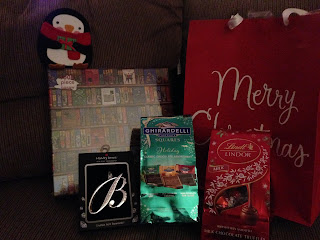 A beautiful bookish puzzle, a monogram ornament, and chocolates!

You must have been very good!