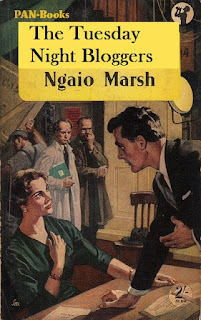 The Tuesday Night Bloggers is the brain-child of Curtis at The Passing Tramp. It's a weekly gathering of like-minded folk to discuss a mystery author from the Golden Age of Detection. We began our meetings with the Queen of Crime, Agatha Christie, moved on to Ellery Queen in November, and now we'll be focusing on Ngaio Marsh for the remainder of 2016. December meetings of the TNB Club will be hosted by Moira Redmond over at her delightful blog, Clothes in Books, so feel free to join the party at her place.
I'm going to open the month of Marsh by discussing one of my favorite titles, Death in a White Tie, which I read most recently last year. I'll be sharing much of my review from that time. Death in a White Tie was a reread for me then. I discovered Ngaio Marsh back at my hometown Carnegie Library (more moons ago than we need to count) and I promptly read through all the Marsh books they had. Later, about twenty years ago, I read some of them again and Death in a White Tie was one simply because it's one of my favorites. There are so many things I enjoy about this tale of murder and blackmail amongst the London Society at the height of the Season--from the witty dialogue, to the scenes at the various society dos (debutante balls and teas and Agatha Troy's one-man art show), to the understated romance between Alleyn and Troy, to his affection for his mother, to the undercurrents of gossip in the chaperone circle at the dance. It's all so veddy, veddy British and elegant and well-done. And Marsh presents us with one of the most sympathetic victims--who doesn't want Bunchy's killer found and punished to the full extent of the law? 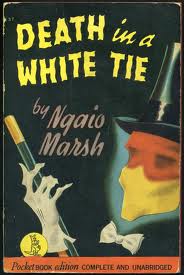 The story begins with Inspector Roderick Alleyn asking Lord Robert "Bunchy" Gospell to assist him in tracking down a despicable blackmailer who is at work among the cream of London society. Bunchy moves through society like everyone's favorite uncle. He can talk to anyone and go anywhere and no one would suspect that behind his twinkle and rather high, almost silly voice lies a very sharp brain that has helped the officials with other difficult problems in the past. His first assignment--to attend a performance of Bach at one of the new concert-rooms and attempt to find out who collects the blackmail money which the latest victim has been instructed to leave in her purse stuffed into a blue sofa.  As Alleyn tells him:

Bunchy, let nothing wean you from the blue sofa. Talk to Mrs. Halcut-Hackett. Share the blue sofa with her and when the austere delights of Bach knock at your heart pay no attention...

Lord Robert does his job well and becomes convinced he knows the blackmailer's identity even though the lights were dimmed when the bag was collected. But he wants to be sure of his facts and confirmation comes at the next society function, a ball held by Lady Carrados for her daughter's coming-out. He calls up Alleyn before he leaves (to be sure the Inspector will still be at the Yard) and, unfortunately, someone walks in on his conversation. Two hours later, a taxi rushes up to the Yard with the driver announcing that his fare's been murdered. He's right...and the murdered man is Lord Robert Gospell.

Alleyn is dismayed and clearly shaken, not because he's lost a vital witness but because he's lost a very dear friend. He also feels directly responsible since Lord Robert was involved purely at his behest and he gives us a bit of the avenging hero speech when he speaks to Bunchy's sister.

I tell you this, Mildred, if it takes me the rest of my life, and if it costs me my job, by God! if I have to do the killing myself, I'll get the murderer and see him suffer for it.

He quickly realizes the melodrama of his words and says, "Good Lord, what a speech! Bunchy would have laughed at it." But, with the aid of  Detective-Inspector Fox, he sifts through the movements of each suspect and makes good on his vow--bringing the crime home to murderer in less than two days.

This is, I believe, one of Marsh's best novels. It doesn't matter that I've read it before and know who the culprit is. I enjoy every minute that I spend in the company of the dashing gentleman policeman, Roderick Alleyn. The story was adapted for television as part of a BBC mystery series and I've also viewed the episode starring Patrick Malahide as Alleyn in honor of the book's entry in the book to movie portion of one of my challenges. While the series is very good and engaging, I do take exception to a few changes made to the story--particularly one character's response to his wife's experience of being blackmailed and the loss of Alleyn's poetic way of declaring his love. Malahide, although not quite the handsome detective I pictured, absolutely owns the character of Alleyn. An excellent performance following the most excellent read. As an added bonus, I also listened to Benedict Cumberbatch read a slightly abridged version of the novel through Youtube.  You could say that I had quite the White Tie orgy back in 2014.

Right Bev, because it's you, I shall give this one a go. I have the series on DVD but have not enjoyed her books at all so far (I thought FALSE SCENT genuinely poor and MAN LAY DYING, admittedly her debut, pretty silly). But as it is you, will definitely give this a go! By the way, is there going to be a Vintage Challenege in 2016? I feel like I missed the announcement!

Darn it! Maybe I spoke too soon. Reading your review, Bev, makes me feel I need to read this one again.

I read this one recently and very much enjoyed it, so I loved your analysis. I think if you're going to read a GA murder, then let it be an all-out one with debutantes and balls, the whole nine yards! And yes, one of the most sympathetic victims around - a pity he had to die, you could have seen him featuring in several books of the series.

My favorite is still Artists in Crime because that is where Troy and Allyn met. Although he wasn't quite himself in that one.