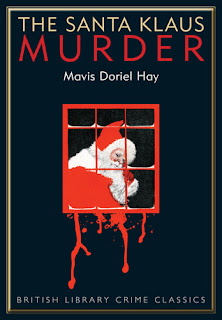 Forget about Grandma getting run over-by a reindeer. Did Santa really murder Sir Osmond Melbury, the difficult family patriarch, during the Christmas festivities at Flaxmere, home of the Melburys?

Sir Osmond, not usually known for his good will, had decided that this year Santa Klaus (none of that Father Christmas nonsense for him) would deliver the toys to the grandchildren during the annual family gathering. So, he orders up a suit and invites Oliver Whitcombe, his preferred suitor for his youngest daughter, Jennifer, to join the country house gathering and dress up for the children. The suit doesn't arrive on time and another is ordered in time for the gift-giving.

But after the presents have been distributed--to grandchildren, children, and staff alike--Santa returns to the study for final orders from Sir Osmond only to find Flaxmere's lord and master shot through the head. When Colonel Halstock, the Chief Constable, and Detective-Inspector Rousdon investigate it appears that everyone but Santa (Whitcombe) had plenty of reasons to want the old man out of the way, but nobody but Santa had an opportunity to do the deed. But then, everyone is hiding a secret or two and nearly everyone has told a few lies. Once the evidence has been sifted, the secrets have been uncovered, and the lies have been traded in for truth, it looks like Santa really did kill Sir Osmond. But it wasn't Whitcombe. Who had time to don a second Santa suit and shoot him while the Christmas crackers were popping? And whose motive was great enough to drive them to murder?

In The Santa Klaus Murder Mavis Doriel Hay provides readers with a fine example of that Golden Age standard--the country house murder. We've got the overbearing, difficult patriarch who holds the purse-strings and likes to make his children dance to his tune and punish them when they don't. We've got his children--grown-up with lives of their own and a desire for dear old dad to pass the family wealth along to help make those lives more comfortable. And a fear that dear old dad may be too fond of his faithful, devoted secretary and be silly enough to marry her or at the very least leave her a sizable chunk of the cash if he decides to change his will. Jennifer, the youngest, just wants to be able to leave home and marry the man she loves (NOT Oliver Whitcombe, by the way). The servants are even hoping for a bit of an inheritance to help make their lives more comfortable as well. In other words, the place is simply bursting with motives.

As mentioned, we also have all kinds of misdirection--through outright lies or a reluctance to tell everything one knows. There are red herrings and planted clues and mysterious messages and the phone call that never came. There's the disappearance of a former chauffeur. It all makes for great fun and a rollicking good tale of murder and mayhem just in time for the holiday season. ★★★★

I'm very thankful for this reprint from the British Library Crime Classics series. Mavis Doriel Hay has long been out of print and I understand that her books are very hard to find in vintage editions. This reprint series has made it possible for Golden Age readers to re-discover authors who have fallen from the public eye.

I liked this one a lot. DEATH ON THE CHERWELL is rather fun, too. But I have no desire to read her third book MURDER UNDERGROUND which Curt says is a rather poor detective novel. Back when I was on the "A List" for British Library Crime Classics when they were being distributed by the University of Chicago Press I used to get deluged with ARCs. I rarely get reading copies now that Poisoned Pen Press is the US distributor for this imprint. Do you want the other two Mavis books I have? They're just taking up shelf space. And DEATH ON THE CHERWELL is an academic mystery. I know you can't resist now. :^)