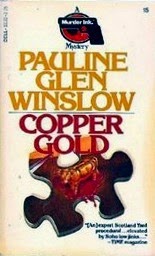 I seem to have gotten myself into a never-ending spiral of not very good books--or at least not very appealing to me books. After forcing myself to finish the psychedelic ramblings of van de Wetering in The Mind-Murders, I gave Copper Gold by Pauling Glen Winslow my standard 100 pages to convince me that she had a tale worth telling....Didn't happen. Not gonna waste another day or two (or more) on a story that just isn't doing it for me--but I get to move it off my TBR pile so it totally counts for Mount TBR and my total conquered for the year. It's off the stacks and shortly it will be going out of the house.

Inspector Copper of Scotland Yard has gotten himself mixed up with Joss Parker, the beautiful owner of a posh London nightclub. His superiors don't like it--it doesn't look good for one of their own to have ties to a lady who is rumored to have ties with the mob. The mob think its just dandy because they also think that a CID man with a shadow on him might prove easy to pressure. Superintendent Capricorn--not exactly Copper's superior, but a long-time colleague and friend, is asked to have "a quiet word" with the inspector about his dubious girlfriend. But before anything positive can be done, there are two corpses and even more whispers of suspicion swirling about Copper. Capricorn must step in to clear his name and find the real culprit.

This just was not in any way, shape, or form a compelling story. Inspector Copper was not a sympathetic character, so I honestly didn't much care if Capricorn would be able to clear him or not (I assume he does....). And Capricorn really isn't an interesting character himself. I gave up after the first dead body appeared and a mafia widow showed up demanding a more thorough investigation than what her husband seemed to be getting. 'Cause she's sure that the little tramp (Copper's girlfriend) or that bent copper (no pun intended) really murdered her dear hubby. [Never mind that she's been in America, separated from him.] It was all just too much and too sordid-feeling for me to take.  No rating because I did not finish.

Labels: Did not finish, Mount TBR, Outdo Yourself