Ride the Pink Horse by Dorothy B. Hughes is the very first Clue book for my Super Book Password Challenge. It helps fulfill many other challenges as well, but I did want to draw attention to my first entry in the Password Challenge. Participants will notice the word in bold. That's your first clue to my choice for "Famous Person." Chew on that one for a while, folks. Next clue coming the second full week of January. Stay tuned. Now for the review.

This particular Hughes book is well out of my usual mystery fare. Very firmly from the hard-boiled and noir schools of detective fiction. It follows Sailor, ex-secretary (and sometimes-muscle man) for Senator Willis Douglass, on a journey to New Mexico to make his former boss pay up for services rendered. He plans on cashing in and then heading for the easy life over the border in Mexico. Also in town is McIntyre, Chicago detective who wants to know who really killed the Senator's wife and is determined to find out. There is very much the sense of the watchers and the hunters being watched and hunted themselves.

Not really a whodunnit--there's no question very early on about what happened to the Senator's wife and who was really responsible for her death. The story is very much about Sailor and the choices he has made...and the choices he still has before him. There are several points in the story where Sailor could choose to change and follow the right path for a change. But are there certain choices that set us irrevocably on a course from which there is no return? McIntyre seems to think that there's still hope for Sailor, but will the Senator's gunman change his ways?

There were sections of the book that I really liked--the conversations between Sailor and McIntyre were very good as the copper tries to influence the crook. It also contains terrific descriptions of the Santa Fe area in the midst of Fiesta--representing the local people and their own struggles--Indians versus Spanish descendents versus white Americans. It is a good snapshot of Southwest American in the 40s.  ★★★

This fulfills the "Out of My Comfort Zone" square on the Golden Vintage Bingo card. 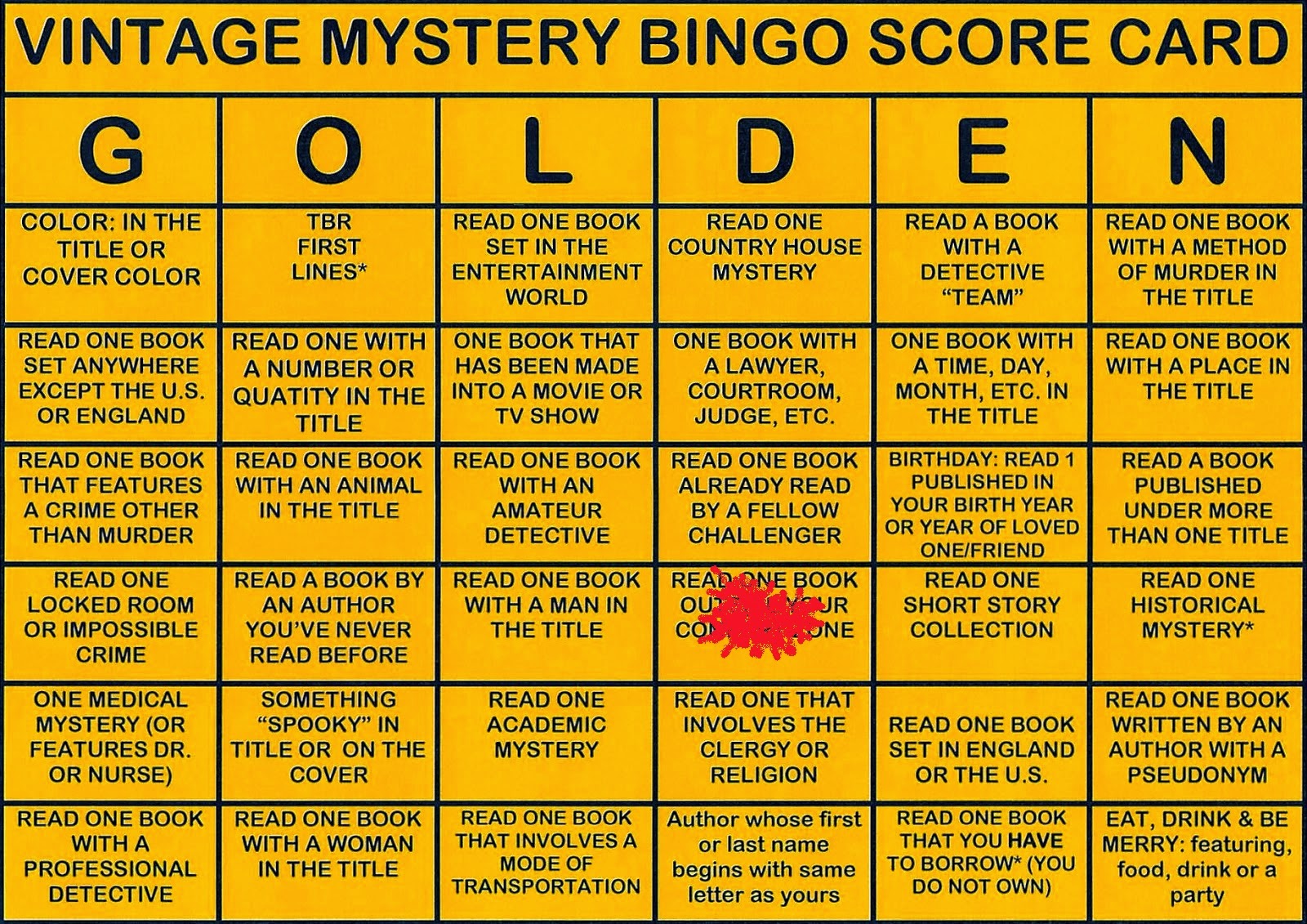 Now I want to know what choices he ends up making.

Ryan: It's a pretty good story. Still a little too noir for my tastes. But I did like the way McIntyre tries to get Sailor to go straight. Nice interplay between the cop and the crook.

I hope to read this one this year also. So did not read every detail of your review... but will come back.

You've already got a square marked out? I'm pea-green with ENVY! :O) Love the blood droplet marking of the bingo card, though. Rock on, reader! :O)

Your blood splatter marking on the Bingo card is a very nice touch. I'd been toying with an idea violence related instead of my handdrwn X's which frnkaly drove me crazy the more I did them. If I find a gif I can steal from the internet mine will be a bullet riddled scorecard. Thanks for the inspiration! I'm a big Hughes fan though I have yet to read this one. You should try The Cross Eyed Bear (sometimes published as The Cross Eyed Bear Murders) sometime it's probably the closest she wrote to a genuine whodunit.

John, I've had my eye out for The Cross Eyed Bear since you first mentioned it on your blog....still looking.

And the blood spatters? I just used the spray paint option in the "Paint" program on my laptop.

I'm so copying that idea for my BINGO Card one I start getting those review knocked out!

Great job getting in your first state read in!

There's a loss of twist and turns Sailor's decisions seem to make. It's interesting that you already know the killer in the beginning and to see how the MC responds.