"In this steamy sequel to The G-String Murders, Gypsy Rose Lee's noir thriller reads as if it's ripped from her own diary pages"

The quote above is from the back blurb of a reprint of Gypsy Rose Lee's Mother Finds a Body (1942). I really must quibble with the statement. A. There is nothing steamy about the novel, except perhaps the weather in Texas--which is hot, but I'm not sure steamy applies (that would imply more humidity than I think is available). And, B. It doesn't read like a noir thriller. It actually reads like a tired vaudeville joke about how many people will fit into a camper trailer. (Yeah, it's about that amusing.)

We are supposed to believe that Gypsy and her new hubby Biff have set out on an Eastward-bound honeymoon in a travel trailer with not only Gypsy's mother in tow, but, apparently, an entire burlesque show as well--burlesque dancers, comedians, animal acts and all. They're all stuffed into this trailer and quite honestly I spent more time trying to figure out just exactly how big this camper is and how did they manage to get everybody in there than I did paying attention to the mystery. The plot of said mystery (what little plot there is) was lost on me from the moment Gypsy's mama nearly burns the woods down in an effort to create a diversion while she digs a grave to hide the corpse mentioned in the title.

So, what's it all about? Well, Gypsy and Biff get married...on a boat (well, a water taxi). And they dredge up a best man from the sidelines. When they decide to go on their honeymoon, Mother comes along ('cause after all, she missed out on the wedding, so they felt like she shouldn't miss the honeymoon. [Don't ask me]) and they manage to pick up the rest of the burlesque folk along the way. [Don't ask me that, either...I still don't understand why.] Long about the time they get settled in a trailer park in Ysleta, Texas, Mother decides to take a peek in the tub under the bed and discovers a decomposing body. It just happens to be the body of the best man. He's been shot. Why has no one noticed the horrible smell--well, apparently the dog [one of the menagerie] has a habit of dragging awful smelling things into the camper and Mother has asthma and takes some horrid smelling concoction to counteract the attacks. [Sounds reasonable to me.]

Mother doesn't want her little darling girl to get mixed up in any bad publicity and decides that they shouldn't tell the police. When Gypsy and Biff disagree, she pretends to give in as long as they'll wait till the next morning to tell the sheriff. What they don't know is she has a plan for getting rid of the corpse. She sets a fire (never meaning it to nearly burn down the woods and to destroy the trailer of another camper in the park) and while everyone is running around trying to put the fire out, she hauls the body away and buries it.

The Sheriff comes along to investigate, finds the barely hidden corpse (which has since had gas poured on it and burned), and wants to know what's up. Mother seems to have him convinced that it can't be her fault (or the fault of anyone in the entourage)--even when she admits to starting the fire, burying the body, and is caught hiding a gun. Then, after the best man's body is removed, another body appears--this time knifed in the back. Could it be possible that the deaths are related? If so, how?

The way everything ties together really stretches my belief...I'm still not sure I believe it. If the second murder had been the only one, I would have been more convinced--but then I'm not sure how it would relate to Gypsy...the thread was tenuous as it was. I also wasn't terribly charmed with the characters other than Gypsy and Biff. Mother is a pain in the fanny and I would have left the other burlesque people somewhere along the side of the road long before Texas. The best thing about the book was the unique nature--a mystery written by Gypsy Rose Lee--and the excellent condition of the Tower edition that I found at the Red Cross Book Sale last fall. Unfortunately, I didn't find the story as good as the edition. There are a few good reviews on GoodReads, so your mileage may vary. [And successful challengers in my reading challenges, may have a chance to find out--I believe I'll be adding it to the prize vault.] ★★

Gypsy Rose Lee was born on January 9, 1911 and so she counts as my January entry for the Birthday Month Challenge. The book also counts for the "Woman in the Title" square on the Golden Vintage Bingo card. 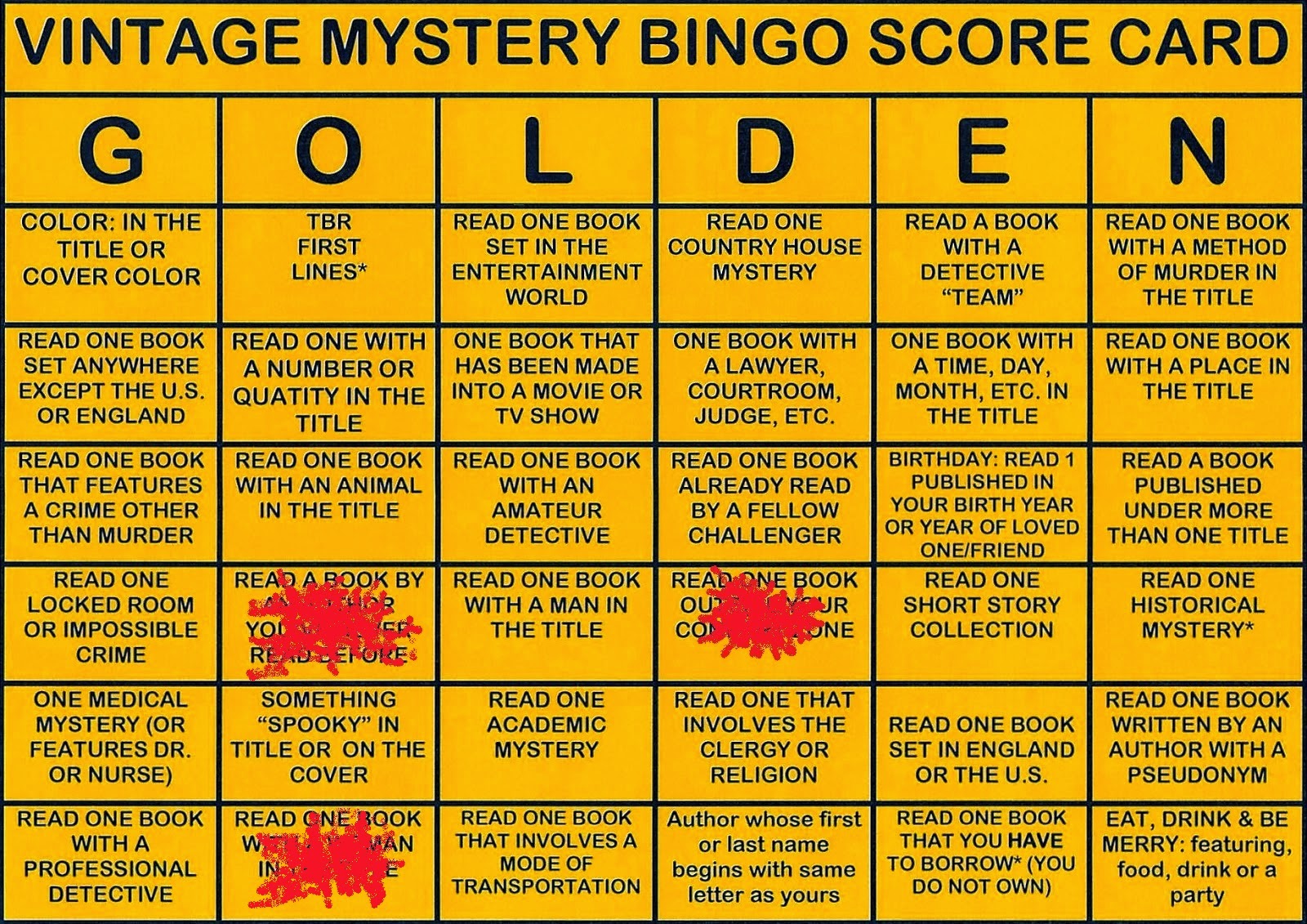 What edition calls it a noir thriller? Must be a reprint from very recent years. I didn't know it had been reprinted. Noah Stewart once told me MOTHER FINDS A BODY was pretty darn awful and I've never bothered looking for a copy. After reading this review now I know Ill never read it.

I like 'noir', it's generally off-beat and gritty. This doesn't give me that vibe at all. I think I will pass.
On another note, wasn't there a song or a movie written because of the author? The name triggers so much for me but the foggy brain cannot remember why.
Great review!

I think I'll pass on this one. If I want to deal with Momma Rose, I'll just watch Rosalind Russell play her.

Well, that stinks. I rather liked G-String Murders so when I saw that there was another Gypsy Rose Lee mystery, I got really excited. To bad this one is so awful.

Gypsy Rose Lee’s son, Erik Lee Preminger says the book was based in part on his mother’s experiences – she really did honeymoon in a trailer – and the comics and strippers in the novel were very similar to the type of people she worked with in her own burlesque career. As for his grandmother – the “mother” of the title – Preminger writes, “My mother said she was ‘charming, courageous, resourceful, and ambitious. She was also, in a feminine way, ruthless…A jungle mother.’” It's also worth noting (for fredamans) that Gypsy's relationship with her mother was the basis for the Broadway musical (and I think movie) "Gypsy," one of the great musical classics.

Elisa: As I mention, the book got a few good reviews on GoodReads...it's possible that if you liked her first one, that you'd like this one. You never know. The saddest thing for me is that it is such a really good vintage copy with dustjacket and all, but I won't be holding onto it. It's gone into the prize bin for my sponsored challenges. Maybe someone will want to give it a home.

JOhn: The Feminist Press reprint (e-book and paperback). I sent you a link by email.

Les: I've got nothing against the trailer honeymoon per se (I grew up camping). But. I really couldn't take the number of people living in the thing with them. Just not reasonable.

Sounds like I would have to be in the correct absurdist mood to read it. Thanks for bringing it to my attention though. I never even knew it existed.