The Golden Slipper & Other Problems for Violet Strange: Review

The Golden Slipper & Other Problems for Violet Strange (1915) is a collection of stories by Anna Katharine Green featuring an early edition of that familiar figure, the "girl detective." Violet Strange is a pretty young debutante with a wealthy father and the spare time to secretly investigate various matters within her social sphere. As becomes a young lady of her station, she is almost always pulled reluctantly into the situation--particularly if there is any bloodshed or violence involved. But the man who introduces her to these problems manages to appeal to her sense of justice and sympathetic interest...or to her need of money. He's not entirely sure why she, a child of fortune, should desire money enough to take on "uncongenial work," but I suspect it is because she wants a sense of independence that having access to your own funds gives. She is free to spend it on what she likes--or to use it support just causes if that is her wont.

I found myself liking the stories which were primarily pure puzzle far more than those with a Gothic or highly emotional bent ("The House of Clocks" and the second half of "Missing: Page Thirteen") and the ones where Miss Strange was less centrally involved were also less satisfying. Overall, a good collection of stories from the early 20th and a nice peek at an early female detective. ★★★  and 1/2.

A Brief Synopsis of Each "Problem":

"The Golden Slipper"  Miss Strange proves who is behind a series of high society thefts.  It would seem to be one of group of friends known as "The Inseparables"--with suspicion focused on one of the young ladies in particular.  Miss Strange uses her own jewels as bait to catch a sneak thief.

"The Second Bullet" In this story, Miss Strange sets out to discover proof of a second bullet--proof that will remove the stigma of suicide from a man's death and allow his widow to collect much needed insurance money.

"An Intangible Clue" This story involves Miss Strange in a "sordid" murder case--something she never intended to be part of.  But...without her observations in the needlewoman's home, the perpetrator would never have been caught.

"The Grotto Spectre" Miss Strange is called upon by a man who once represented one of society's grand families and who is now shunned because of his ill-chosen marriage (to a woman who led him into the clutches of gambling) and the rumors that he caused her death (though cleared at the inquest). He, however, suspects that his father may be responsible and asks Miss Strange to settle his suspicions once and for all.

"The Dreaming Lady" This time Miss Strange stipulates that her next case must not contain any kind of horror or death. Her conditions are met when Mrs. Quintard, sister of a well-known financier, is in desperate need of someone to find a missing will.

"The House of Clocks" A strange (no pun intended) Gothic piece. There really isn't much of puzzle for Miss Strange to unravel. It is all told to her by the faithful servant of an evil step-mother....


"The Doctor, His Wife, and the Clock" Miss Strange is given a bundle of papers describing an unsolved murder from before her interest in puzzles began. Her job? To find an entry to the home of a doctor who had lived beside the murdered man. Her real involvement in the resolution? Minimal--it is her employer who really solve this one. It would seem that Miss Strange's career as a sleuth is petering out....

"Missing: Page Thirteen" Miss Strange decides to take just one more case--at the instigation of Robert Upjohn (the man involved in the "Grotto" mystery). This time, she is busy tracking down a missing scientific formula relating to explosives [aren't they always?]. She quickly solves the mystery of the missing page and is then made privy to another, older secret.

"Violet's Own" This is not really a problem--except that it is Violet Strange's telling of the initial problem that set her on her course for earning money as an investigator. And it proved my thoughts on her motives to be right--she did, indeed, want money (not of her father) that she could spend as she chose.


This counts for the "Have to Borrow" square on the Golden Vintage Bingo card [read from Project Gutenberg]. I am also offering it up as an entry for Rich Westwood's monthly challenge. Each month he posts a publication date for review entries at his Past Offences blog--January's date is 1915. 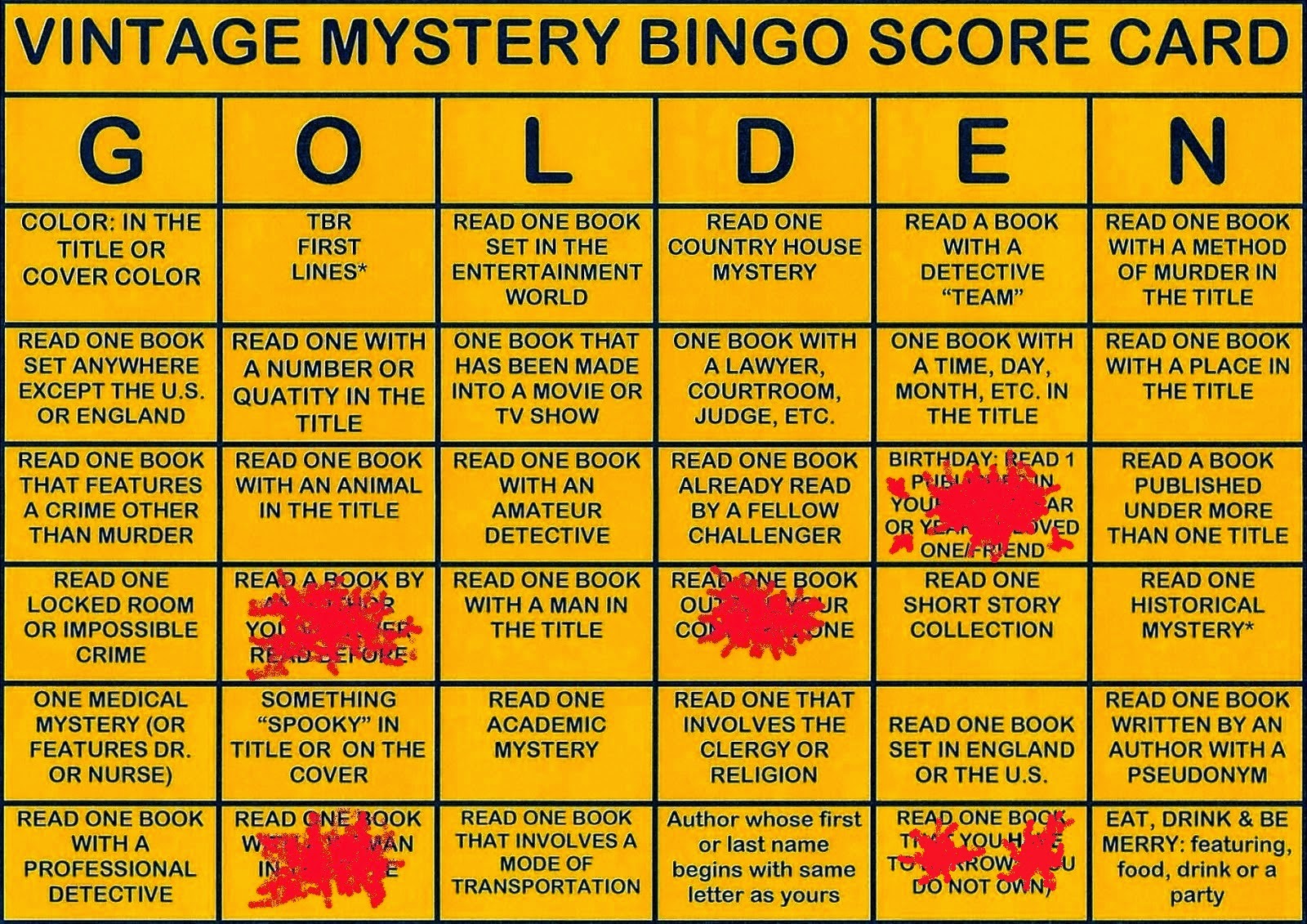 Labels: 100 Plus, 52 Books in 52 Weeks, Back to the Classics, Century of Books, Cloak & Dagger, Crimes of the Century, Eclectic Reader, How Many Books, Vintage Mystery Challenge

I nearly chose this one! But looked for another title when I read the sign-up comments on Rich's blog. I made sure I wasn't picking a duplicate of any titles mentioned. I did read the first story prior to learning this was your choice for 1915, and wasn't too impressed with Violet's sleuthing skills though she is somewhat engaging.

Bizarrely coincidental that the main plot of book I chose instead (The Official Chaperon) was almost exactly the same as the first story in Green's collection! Then I wanted to read another 1915 book since Lincoln's was barely a crime novel and not at all a detective novel. The Comlyn Alibi had a speed trap in it just like The Official Chaperon. Cue the "Twilight Zone" theme....

My favorites are "The Second Bullet," "An Intangible Clue," and "The Grotto Spectre" (which sounds more Gothic than it is).

I think I need to see if I can find a copy of this. I'd never heard of it before.

Carol: This is one of the few times I've read something electronically (through Project Gutenberg). I needed a 1915 mystery for Rich's monthly challenge and didn't have anything of my own on the TBR stack.

Had to change my square choice--it dawned on me that since Miss Strange gets paid for her investigations that she really isn't an amateur....