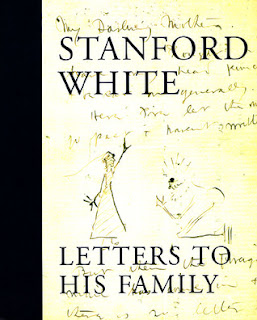 So....I picked up Stanford White: Letters to His Family by Claire Nicholas White (ed) primarily because it had the all-important word "white" in the title and I seem to have a difficult time finding "white" books to read for my Color-Coded Challenge.  Also, it was one of the shorter "white" books available and I was hoping for a quick read.  White was a fairly well-known American architect who was a member of the firm which designed a fair number of NYC buildings.  There's not a lot to say about this.... It was a very nice idea--Lawrence Grant White, the son of Stanford White, had gathered up these letters which were written by his father from the age of 10 to the last letter written one month before his death in 1906. Lawrence had mounted them in beautiful leather-bound books, each impetuously scribbled letter accompanied by a typewritten transcription. It was so obviously the labor of love and admiration of a son for his father that this alone made them precious.  {This also makes this an ideal book to submit for the A-Z Book Challenge Mini-Challenge--read a book with a father-figure}.  But I can't say that I found the letters all that interesting.

And it's not that I don't like books made up of a collection of letters.  The various collections of the letters of Dorothy L. Sayers are marvelous.  I loved the reading the correspondence of Katherine Anne Porter.  But these women were writers.  Maybe that's what makes the difference.  White was an architect and didn't seem to be an inspired letter-writer.  He spends a lot of time explaining why he hasn't written.  Or explaining that he has, but it's not very good.   There were moments--brief, fleeting moments--when Stanford White would send a letter home from France to his mother, or a missive from his travels out West home to his fiancee Bess and he would turn a phrase that struck me as particularly apt.  This happened when he just wrote the letters and didn't overthink them.  But overall, the kind of letters that only a mother could love and a doting son would want to save and see published.

The most interesting thing to me was to see how widely Stanford could travel in Europe on apparently very little money.  It amazes me how young people could do the "grand tour" and not wind up owing incredible amounts of money.  I stagger to think what the bill would be nowadays to travel to France and then go off to Italy and Constantinople and back to Greece and over the Alps then on to England and back to France.  The other interesting thing (initially pointed out to me by Yvette from In So Many Words) was to find out that Stanford White ended his life as the victim in what was billed as the "crime of the century." [There seemed to be a lot of those at the turn of the 19th C.]  White had been involved with a beautiful young actress by the name of Evelyn Nesbitt (31 years his junior, by the way) who later married the wealthy Harry Kendall Thaw.  Even though the affair had ended 15 years previous, Thaw was incredibly jealous and killed White on the Madison Square Roof Garden (the second building of that name--and, ironically, one of those designed by White).  After reading snippets about this incident, I think I would have been far more intrigued by one of the books which covered this high-profile murder than I was by the collection of letters.  Two stars--an okay, but uninspired read.