The House of a Thousand Candles: Review 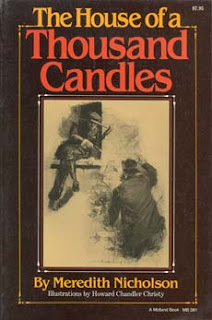 There are several reasons why I grabbed up The House of a Thousand Candles by Meredith Nicholsoan from the local library Friends of the Library Bookstore a couple years ago: it's a vintage mystery (written in 1905); it takes place in Indiana (that's where I'm from and where I am); and it  promised a "classic romantic thriller" with "all the elements of a good mystery story."  There were lots of reasons to read it now (or at least this year): my very own Vintage Mystery Challenge (for the number in the title); the What's in a Name Challenge (a kind of house); the Death by Gaslight Challenge (Victorian era mysteries); the A-Z Mystery Authors Challenge (letter "N"); the Criminal Plots Challenge (book written by an author from where I live); and the adult summer reading challenge from my local library (a book with an Indiana connection).  As you can see, it's all about the challenges.

The story line really did seem to promise a great deal. John Glenarm has been wandering around through Europe and Africa, blithely spending the inheritance left him by his father--getting into scrapes and having all sorts of adventures.  He's just come to the end of his finances and determined to settle down and practice his profession (engineering) when he receives word that his grandfather has died and he must return home to learn the contents of the will.  He is dismayed to find his old classmate and rival, Arthur Pickering, is the executor of his grandfather's will and holds sway over his inheritance.  The old gentleman's final wishes are simple: In order to inherit, John must go to live in Glenarm House in Indiana for a period of one year and live a quiet and sober life.  If he doesn't then the inheritance will go to one Marian Devereaux....someone of whom John has never heard.  There is also and odd clause which states that if John and Marian happen to marry within a five-year period of John's agreeing to the terms of the will then the entire fortune will be given to a local school.

John determines that since he had been such a ne'er-do-well while his grandfather was living, he will do his best to live up to the gentleman's wishes after death.  He settles into the house in Indiana and that's when the fun begins.  During his tenancy, John is shot at, hears mysterious noises in the house, has run-ins with intruders and ghostly sightings, discovers secret passages, and begins to fall in love with a girl who seems to treat the house as her own.  And before it's over, he will suspect nearly everyone of being in league against him and there will be an old-fashioned shoot-out.

There are many reasons why this story should have been a success--lots of action and intrigue--but it fell a little flat for me. I wasn't very invested in the main character.  Quite often when you have a hero who is represented as a bad boy, you find that he is really a lovable rogue.  I felt like John was supposed to be....but he just didn't quite cut it for me.  My favorite character was actually Stoddard, the battling minister who stands by his side in the final assault on the house.  One thing I will say for John, I totally sympathize with him over feeling betrayed.  And I don't quite get why a certain young woman can't understand why he might think she was working against him.  If you refuse to explain your actions, what else is a poor guy to do? On the surface, the evidence is very much in favor of his interpretation.

This was a decent read from the turn of last century.  It does have an interesting twist at the end and it's always satisfying to see the villain of the piece get what's coming to him. Not quite as exciting as anticipated, but a solid three star outing.