So...while the Route 66 Road Trip was primarily for my husband--the man of the '66 Mustang who was feeling all nostalgic and conceived the vacation idea--I had my fun too.  I got to stop at three bookstores along the way! (Oh, and, yes, I did enjoy the Route 66 driving bit too).  My total book haul for the week's journey is 37.  Here's a break-down of the loot and a brief description of the book stores. 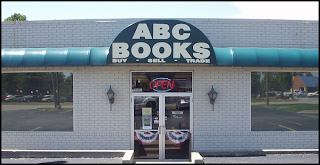 First stop was at ABC Books in Springfield, Missouri.  This store looks like your standard store front from the outside, but hidden inside towards the rear of the store is a very nice used bookstore atmosphere.  A very substantial selection of paperback mysteries ranging from vintage pocket size (I scored two that I just couldn't live without and agonized over a third that I finally decided was out of my price range) to modern crime and thrillers. Also a smaller range of hardback mysteries.  I left the store with 10 paperbacks.

The Union Club Mysteries by Isaac Asimov
Murder at the Pageant by Victor L. Whitechurch (Dover Edition)
A Coffin from the Past by Gwendoline Butler
The Cape Cod Mystery by Phoebe Atwood Taylor
The Tragedy at Tiverton by Raymond Paul
The Fourteen Dilemma by Hugh Pentecost
The Crabtree Affair by Michael Innes (First  paperback edition)
Invisible Green by John Sladek (a locked room mystery that I'd never heard of before....)
The Labors of Hercules by Agatha Christie (1st New Dell pocket size edition!)
The Scarab Murder Case by S. S. Van Dine (Graphic Mystery Classic pocket size edition!) 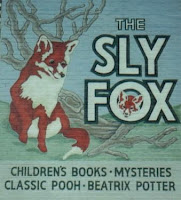 Next up was The Sly Fox in Virden .  This store is advertised on the Mystery Booksellers website as the "only mystery bookstore in Central Illinois and on Historic Route 66" and was the only intentional bookstore stop on our agenda.  When I found The Sly Fox on the internet, I immediately told the hubby that we needed to make a stop in Virden as part of our itinerary.  Our schedule didn't allow us to visit during business hours on our way west, so we stopped in on our way back to Indiana.  The store was a bit of a disappointment to me.  Its focus is on new issues--and, of the small amount of stock on display, I'd say less than half (35-40%ish) is mystery.  Not that the experience wasn't pleasant anyway--the owner is very nice and after chatting about mysteries and our Route 66 journey he offered me a discount on the five Rue Morgue Press titles that I'd decided on.  And--I have him to thank for my next bookstore stop. That alone was worth the visit.  But before we talk about that...here's the list of books from The Sly Fox: 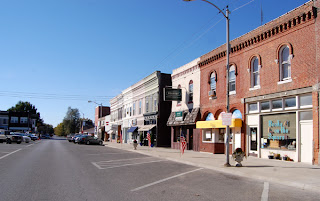 (at right side of photo; image source)

And now...the best book stop on the journey.  As I mentioned,  as I was checking out, George (owner of The Sly Fox) told me about the "other" bookstore on the opposite side of the square in Virden.  "He doesn't really carry much in the way of mysteries," he said--but thought that he did have selections that the hubby would be interested in.  So off we went.  Not much in the way of mysteries? Seriously?  I pushed my husband's patience to the limit and came out with a whole boxful of my vintage pocket size editions plus some Star Trek fotonovels from the 70s that we both love.  And I could have done some really serious damage to our retirement savings if I had wanted to.  There were boxes of books that I didn't even touch....and shelves of pocket size editions that I valiantly refused to hear calling my name. This lovely little (did I say little?  Three rooms full of books) rare and used bookshop reminded me of the best used bookstore ever--Mason's (sadly, no more)--when it was in my hometown.  I could have stayed for days.....And what did I bring home, you ask?  Well....

Non-pocket size mysteries:
Stag Dinner Death by John Penn
The Sleeping-Car Murders by Sebastian Japrisot (aka The 10:30 from Marseilles)
Death Has Green Fingers by Lionel Black

They only made 12 Fotonovels from the original series--all we need now is #12!

All-in-all, a rather spectacular book buying binge.  I can definitely say that I had a good time on vacation!

You are one lucky woman. It is such fun to find such bookshops, isn't it?

neer: Yes, I am lucky. Particularly lucky to have a husband who indulges my book-binge tendencies.... :-) I wish I could move this bookshop a little bit closer though (it's about a full state away from me). That might be good for our bank balance though.....

What a wonderful group of bookstores. I am very envious. I collect vintage paperbacks and that last bookstore would be heaven. Mapbacks are my favorite.

I've always wanted to visit The Sly Fox but now I'll not bother. Only vintage mysteries for me when I go book hunting. However, the other store (got your email, too) sounds terrific, especially now that I see what you found there. Amazing! Just the Lionel Black and the Stuart Palmer Perma edition would've made me happy. If only your copy of The Illustrated Man was the Ballantine paperback. That's worth a chunk of change. But very impressive for a little unknown store in a tiny little Illinois town. The best kind of book buying trips tend to be in the little known places in small towns.

If I had known before I went into The Sly Fox that the used bookstore was hiding on the other side of the square, I would have saved the money spent on reprints (which I don't mind...until I can get my hands on vintage editions) to use at Books on the Square. As it is, I don't begrudge George the 5 reprints I bought since he pointed me in the direction of a terrific vintage haul.

That's quite a haul, Bev. If I'd know you were coming through Springfield, Terry and I would have treated the two of you to dinner. Don't plan your next vacation until you've checked with me, okay? Glad you enjoyed yourself.

Oh, darn it, Carol. I forgot that Springfield was your stomping grounds. The way traveling went, we probably wouldn't have hooked up with you either....Was aiming to visit with one of my former grad students in Collinsville, IL and that didn't work. Maybe next time (for both of you).

OMG!! Did you have to rent a U-Haul it to get your books home? lol. Thinking you spent many hours in those stores. I'm so jealous lol!!
Enjoy them all. Guess we won't be hearing from you for a while lol.