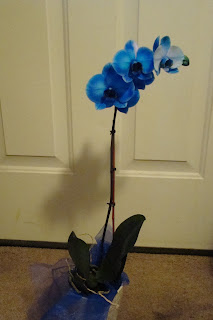 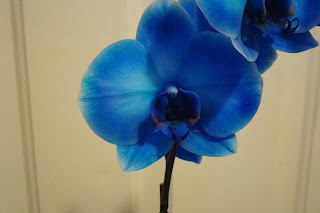 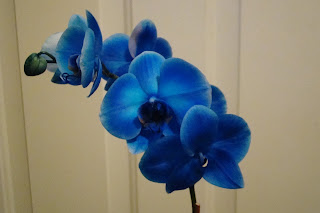 Yesterday was my 21st Wedding Anniversary.  I've been angling for these blue orchids for quite a while now...ever since I first saw them on display at our local store.  Hubby earned bonus points for the anniversary by showing up with these lovely flowers.
Posted by Bev Hankins at 4:24 PM

That color is amazing! I don't think I've ever seen orchids that shade...

Such a gorgeous shade of blue! Happy anniversary!

Happy Anniversary! They ae very exotic. I've been looking at blue flowers as well, but they're common wildflowers - bluebells, in a wood, http://chriscross-thebooktrunk.blogspot.co.uk/2012/06/witches-woods-and-saturday-snapshots.html

Happy Anniversary-these blue orchids are quite beautiful. I have never seen blue ones before.

I love the kitty photo-the first one-for a random photo I thought it came out well-his coloring and the rain drops are what I think made it a good shot.

Oh my gosh! I've never seen blue orchids but they are gorgeous! I've always wanted to try to grow orchids. Happy anniversary to you!

Beautiful! And what a great blue!

lovely, just bought an orchid to bring to a friend today, but did not see any blue. This one is lovely! Happy Anniversary

Happy Anniversary, and yes he should get bonus points.

Quite a vivid blue. Nice pics and happy anniversary. Thanks for stopping by my blog earlier.

Congratulations on your wedding anniversary.
Our anniversary was yesterday also.

The orchids are beautiful. I did not realize that particular orchids can be in blue.

Cheri and had attended 2 orchid festivals in San Francisco in the past.

I know I'm revealing my ignorance here, but I really had no idea what orchids looked like prior to seeing photos of them via Saturday Snapshots. They are so pretty, and that blue color very unusual!

I'm lovin' that shade of blue!!

I've seen blue orchids like these and always wondered about the color. Is that a natural color? I can't think of any other blue flowers, except blue hydrangea and I know the acid in the soil affects the color of those.

Blue orchids are so amazing! And these are gorgeous....and what a lovely anniversary gift! Happy Anniversary, and enjoy.

Thanks for visiting my blog.

Congratulations Bev & hubby! The orchid is is exotic!.

Eva @View from the Hillside said...

Lovely, and happy anniversary.
I've been looking at blue orchids lately too, they are so beautiful. It's just that we have several orchids already, and I try to be sensible. Sigh....

Such beautiful flowers -- and Happy Anniversary to you!
Your pic reminds me that I have this novel called The Orchid Thief on my TBR shelf..... must get to it.