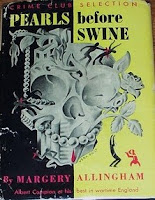 Pearls Before Swine by Margery Allingham is the last book of my projected choices for the Vintage Mystery Challenge "Dangerous Beasts" Theme....and also, by the way, one really eccentric book.  It opens with this scene:

The man and the woman carried the body cautiously up the stairs. Although it was still early evening, the narrow way was grey and shadowy, and it was very cold, colder even than it had been outside amid the thin traffic of a wartime London. The two who were alive in that grim little group which writhed and breathed so hard in the gloom were both elderly people.  they were an unexpected couple in any situation; the man was a large, blank-faced Cockney without any pretensions and the woman was out of place beside him, her delicate aristocratic grace accentuating both his clumsiness and the horror of her present task.

And just gets odder as things go on.  The man and woman in question are transporting the body to the apartment of Albert Campion, amateur detective and adventurer....and a man who is not supposed to be at home.  However, Campion has just returned to England after spending three years doing top-secret war stuff (see quote below) and is making a stop at the London apartment before heading to his country hearth and home (not to mention wife and babes) for some well-deserved R&R.  He is lounging in a nice warm bath when he hears footsteps and whisperings in the outer rooms.  And makes the mistake of investigating.

He discovers that his old retainer, Magersfontein Lugg and the Dowager Marchioness of Carados, are the whisperers and that they have deposited the body of a woman on his bed.  Not only will he miss his train--but he will be chloroformed and kidnapped, become involved in a search for a gang of art thieves, see two more of the Carados entourage nearly killed, and find himself feeling at odds with his friends in the police department.  The police are quite sure that the mastermind behind it all is Campion's old friend, Johnny Carados (the Marquess of Carodos)...and although all indications seem to point that way Campion just can't believe it.

There are way too many characters introduced in the opening chapters for me to keep track of.  I kept having to regroup and think out who was who and how they connected with the story.  And everybody seemed to talk in non sequiturs...or made cryptic remarks that everyone in the story seemed to understand, but I didn't.  But even with these two complaints, this is still a very enjoyable story.  It was refreshing to have a war-time mystery that didn't focus on a spy ring.  And full marks to Allingham for having laid the clues out and completely confusing me with all the characters and conversational hocus-pocus.  I didn't see the ending coming.  It's worth the price of admission just to meet Miss Dorothy Pork in a little village called Chessing.  She's a marvelous upper-class, small village spinster and one of the more delightful speakers in the piece.  Three and a half stars.

Quotes:
The man and woman carried the body cautiously up the stairs.
****
Meanwhile in the apartment above, Mr. Albert Campion, who was in that particular state of ignorance wherein it is downright idiocy to be wise, was taking a warm bath. (p. 9)

For three years he had been at large on two warring continents employed on a mission for the Government so secret that he had never found out quite what it was, or at least that was the version of his activities which it seemed most prudent to give at the moment. (p. 10)

It is never easy to explain one's exact relations with a woman, is it? [Philip Stravos] (p. 78)

DE: I'm afraid the whole thing sounds crazy to you with so much serious business going on all around. It does to me, but quite apart from the real business abroad a whole series of silly little things, some of them pretty serious and some of them pretty small, seem to be happening in this town at top speed.
AC: I know.  I've not been back for twenty-four hours yet, but already I've noticed a certain March-hare quality; a sinister March hare, if I may say so, about the old home.  It's very odd.  Rather alarming.
DE: Oh, so it's not always like this?
AC: Not at such speed.
[Don Evers; Albert Campion] (p. 88)

Nobody, nobody ever killed anyone simply in order to provide an awkward corpse in someone else's house. [Campion] (p. 103)

I never have told this story because it is both sentimental and romantic, and neither of those delightful things is the better for an airing, don't you know. [the Bishop of Devizes] (p. 114)

JC: I don't think I'm permitted to tell you anything.  We'd better have Oates up here, I suppose, but he's not sure of me; at least I don't think he is.
AC: No policeman is ever sure of anybody. That's the first thing they learn at the college.
[Johnny Carados; Albert Campion] (p. 123)

She had such poise and authority, even now when she was in her softest mood, that Campion could understand much which had hitherto puzzled him. The behaviour of the police for one thing, and Lugg's unaccountable obligingness, for another. Her potential dangerousness grew at every moment.  She was like a beautiful, high-powered car driven by an engaging maniac. [p. 130]

*****
Every scrap of information which he had gathered in the twenty-four hours revolved before his inward eye, trying to slip into the pattern which was already forming.  The discovery that Gold assumed automatically that Johnny was privileged beyond all the normal bounds of civilized behaviour was one of these. It had been odd coming from him and had reminded Mr. Campion of an incident in his own youth when the nurse of the small friend who had just pushed him into the Round Pond had turned to his own avenging Nanna, and had said in exactly the same tone of startled protest: "But he's a duke."

At the age of four and a quarter Mr. Campion had taken a poor view of the excuse and did so now, with the added advantage of knowing that ninety-nine percent of the world agreed with him.  All the same, he found it interesting to note that the remaining one percent still existed and was at large. [p. 141--they had the "99%" even then!]

It's terrifying to think that you can see people every day and never know them. [Johnny Carados] (p. 199)

There was a person not yet three upon the path; he was white-haired and was wearing sunglasses. At the moment he was squatting by a puddle, one discarded sandal firmly clasped in his hand. His preoccupation was a simple one. He was trying to fit the shoe into an imprint recently made by it in the mud.

As Mr. Campion came up to him he raised his head from his task and stared upward, and for a time they stood looking at one another in amazement.

A girl with red hair and a wide mouth came out of the cottage and joined them. She was brown and slender, and her green dress was formal and a little old-fashioned.

Nobody spoke, and the moment hovered in time as if it was loath to pass
Posted by Bev Hankins at 9:13 PM

Oh, Wow, that was a long one!
I loved your review & boy, did you knock out several challenges with this one.
The teasers were a lot of fun!!

So I have a feeling this will be a book I get to next year. A friend of mine sent this one to me.