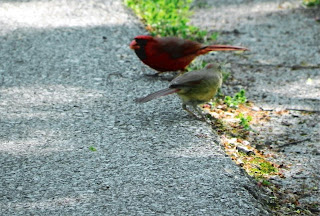 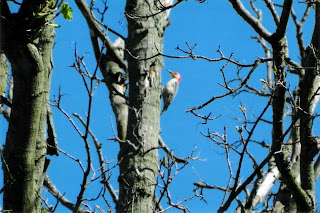 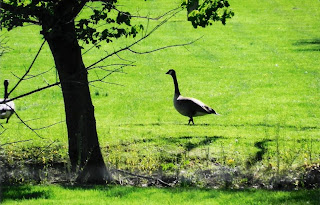 For whatever reason, I seem to have the best luck with bird photos in December....when my parents come for a visit and we go for a walk on the trail near my house.  These were taken this past year and I was most proud of the cardinal pictures I took with my mom's camera.  Above is the best shot of the couple together.  And I was most surprised by the picture of the woodpecker--when I took it, I didn't think it was such a great shot (I had the camera on maximum zoom and he was just so far away).  But when Mom sent me the pictures I was pleased to see how he looks.  The Canadian geese were just strolling along with us over in the back yards of some homes along the trail.

Nice composition on these shots. Love the blue sky behind the woodpecker too.

I like the little red bird in the first photo. Is that a cardinal? We don't get them in the UK, but we have lots of geese in Tamworth, but they won't stay still when I try to snap them. Thanks for looking at my Snapshot, and the nice comment.

Oh, yes I like your bird shots too. Just discovered Sat Snapshot♫

I love zoom shots that unexpectedly turn out great--like this one!

Those are great pictures! I don't have much luck with bird photos.

It's nice you see the red cardinal. I don't think there are cardinals here in California.

I used to see them in Michigan when we lived there.

There are a lot of geese near the river where I walk.They fly in beautiful formation.

Awesome job capturing these pictures of all those birds -- they are great!

You'd never know it was December by how green everything is:) great shots

@Diane...it's so green because we really didn't have a winter here in Southern Indiana this year. I don't think the kids had even one snow day.

Leslie (Under My Apple Tree) said...

Nice action shot of the Red-bellied Woodpecker. I like the way the Cardinal couples are always together even when it's not breeding season.

I find winter is easier to get good shots. No leaves on the trees and the birds aren't hyper that you are going to mess with their babies.

These are great pics, I ADORE birds -- and my favorite shot is also the cardinal couple, out on a date!

I love watching birds and taking pictures of them. You've captured some interesting ones... up close and personal. Now, I've seen a lot of Canadian geese here esp. in the fall and winter, and rarely a woodpecker. But, don't think I'll ever see a cardinal in this area (Alberta). ;)

@Arti: I see a lot of Cardinals here in Indiana...but they rarely sit still long enough for me to capture them. Especially the female, she always seems to be very camera-shy.

I have an affinity for birds and so enjoy seeing your pix. Of course, the showy cardinal really caught my eye.
:)

I love cardinals, and that's a great picture of the male and female together. Thanks for visiting my blog!

I've only seen cardinals twice, so I think they're pretty cool. The first time I saw one was while walking around the grounds at George Washington's house. It was a fun memory.

I would not think December as being a good month for bird shots-you must be somewhere warm given the color of the sky.

The pair in the first photo look as if they're waiting for something...Christmas? lol

Great shots, and I love the idea of walking along a trail nearby. Sounds lovely! Thanks for sharing...and for visiting my blog.

Nice that you were able to get pictures of the cardinal and woodpecker! I love that goose gandering about!

I like the cardinal one too. All of the photos turned out very pretty. Can't believe it's December, so nice.

very nice photos, I always forget to try to capture birds on film when I happen to see them... thanks for stopping by my Saturday Snapshot :) Book Savvy Babe

I like the picture of the cardinal, too. We sometimes see them here as well.