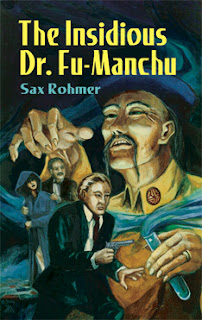 I just had me a nice little dose of déjà vu.  Earlier this year I read Sax Rohmer's The Golden Scorpion.  And now I have finished The Insidious Dr. Fu-Manchu.  And it was like reading the same pulpy, cliff-hanger, Yellow Peril story all over again.  Evil, all-powerful, Chinese master criminal bent on world conquest with ominous green eyes? Check.  Leaving behind a trail of murdered experts in their field?  Check.  Beautiful, mysterious, woman who is strangely enslaved to the evil master criminal, but who has fondness for our gallant narrator and who alternately helps him and does her master's bidding?  Check.  Edge-of-your-seat endings to each chapter as the heroes narrowly escape from danger, just miss saving someone from the villain's clutches, or occasionally snatch a victim from Fu-Manchu's grasp? Check.  Throw in a huge supply of weird, dangerous creatures to spice things up a bit--and we're all set.

This time our evil villain, Dr. Fu-Manchu, is determined to get his hands on all the experts on the Far East that he can--and eliminate them.  He's also picking up a few doctors and scientists along the way and sending them back to China where they will be forced to aid him in his quest for world domination.  Nayland Smith, who has mysterious connections with Scotland Yard, is out to stop the doctor no matter what the cost.  Smith enlists the help of his friend Dr. Petrie--and the two of them set out to warn and rescue as many people on the doctor's hit list as they can.  With mixed results.  The final showdown occurs in a cottage and ends in flames.  But is it the end of the Doctor?

Once again, this story is not for those who want a nice sanitized view of the early 20th Century.  Rohmer uses the period's conventional mistrust of the Far East and the Asian culture to create his super villains--members of the Yellow Peril, a group bent on dominating the world and, particularly, conquering Britain and America.  It's good old fashioned fun--especially for those of us who are familiar with the cliff-hanger serial stories of yesteryear. Lots of hyperbole and exaggeration (I've given a few examples below)--either about Fu-Manchu or in his dialogue.

If you're looking for fast-moving, pulpy fun, then Rohmer is your man.  Another fun romp through one thrilling adventure after another.  A good solid three stars.

This is also my final read for the League of Extraordinary Gentlemen Challenge.  And I would have to say that of all the characters included in that graphic novel, Fu-Manchu was the most faithfully rendered.  Maybe it's easier to get it right when you're already dealing with an over-the-top villain.  I don't know. But Moore did a great job capturing Fu-Manchu's "I'm going to rule the world!!!!" madness.  Don't remember straight off whether he got the Doctor's eyes piercingly green enough or not.  But well done on Fu-Manchu over all.

And--this being one of the classic pulp thriller/detective novels, I'm counting it for the Classic Bribe Challenge as well.


Quotes:
Other members of the household were moving about, more or less aimlessly, and the chilly hand of King Fear had touched one and all, for, as they came and went, they glanced over their shoulders, as if each shadow cloaked a menace, and listened, as it seemed, for some sound which they dreaded to hear. (p. 4)

Singular though my friend's  proceedings appeared to me, I had ceased to wonder at anything. Since Nayland Smith's arrival at my rooms I seemed to be moving through the fitful phases of a nightmare. (p. 9)

But a woman is a two-edged sword, and treacherous. [Nayland Smith] (p. 11)

Imagine a person, tall, lean and feline, high-shouldered, with a brow like Shakespeare and a face like Satan, close-shaven skull, and long, magnetic eyes of the true cat-green. Invest him with all the cruel cunning of an entire Eastern race, accumulated in one giant intellect, with all the resources, if you will, of a wealthy government--which, however, already has denied all knowledge of his existence. Imagine that awful being, and you have a mental picture of Dr. Fu-Manchu, the yellow peril incarnate in one man. [Nayland Smith] (p. 13)

It was a sidelight upon the character of the awful being with whom we had to deal. My very soul recoiled from the bare consideration  of the fate that would be ours if ever we fell into his hands. (p. 19)

There are few states, I suppose, which exact so severe a toll from one's nervous system as the anticipation of calamity. (p. 56)

I felt as one bound upon an Aztec altar, with the priest's obsidian knife raised above my breast! (p. 56)

"They die like flies!" screamed Fu-Manch, with a sudden febrile excitement; and I felt assured of something I had long suspected: that that magnificent, perverted brain was the brain of a homicidal maniac--though Smith would never accept that theory. "It is my fly-trap!" shrieked the Chinaman. "And I am the god of destruction!" (167)

Labels: 150 Plus, Classic Bribe, League of Extraordinary Gentlemen, Mount TBR, Off the Shelf

I enjoy Rohmer's novels, but they are kinda racist. If you can ignore that, though, they're tons of fun.

Wonderful review, thanks for being on the challenge and I hope you enjoyed it.

I think that while the book is racist in today's terms, it is a prime example of how people viewed the Yellow Peril when it was published.