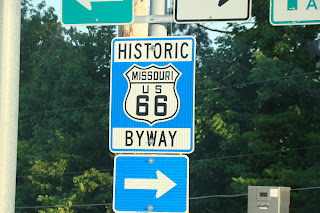 Saturday, June23: We left Bloomington at about noon--this was later than we wanted, but you know how life gets in the way sometimes.  Our non-Route 66 travels to western Illinois took us on Indiana 46 and Interstate 70 until we picked up the most modern version of Route 66 on I-55 between Edwardsville and Collinsville (post 1963).  At Collinsville, I made sure to get a picture of the giant* catsup bottle for my son--who likes catsup on  his catsup.

*Please note that the term "giant" is used very loosely.  It can mean everything from the size of a water tower (in this case) to man-sized (in the case of a "giant" penguin later in the trip).

We followed I-55/Route 66 across the Mississippi and around St. Louis, getting our first view of the Arch (lots of pictures).  Following this section of Route 66 took us along Gravois, Chippewa and Watson in the southern/southwestern portion of downtown St. Louis.  There were lots of "ghosts"--remnants of old businesses and homes in these neighborhoods as well as some very well-kept brownstone, cottage-style houses (in several repeated variations) and beautiful old churches.

West of St. Louis, Route 66 jumps on and off I-44 as well as moving from one side of the main highway to other.  It took us through small towns with names like Eureka, Gray Summit, St. Cloud and Bourbon.  It was a lovely drive through forested hills and it was nice to be away from the frantic traffic of the interstate.  Many pictures of the road and, just for my friend Richard, a picture of the "water" tower labeled Bourbon.  Our first night was spent in the charming, recently remodeled (as in refurbished to look original) Wagon Wheel Motel in Cuba, MO.

The Wagon Wheel holds the distinction of being the oldest, continuously open motel on Route 66.  The owner kept rooms available through-out the remodeling process in order to maintain the honors. [according to the clerk who checked us in--online info seems to indicate that the motel was closed during restoration] The main building which holds the office (w/original check-in desk and file card registration system) and a small gift shop is gorgeous.  She removed a dropped ceiling which had been added sometime in the late 60s/early 70s to expose the original, all-wood ceilings.  The ceiling, now that it has been refinished and restored, glows.  She also began tearing down a large/dilapidated second building to discover the intact original garage area with oil pit.  This building is now display-only, with a vintage car over the oil pit to add verisimilitude. 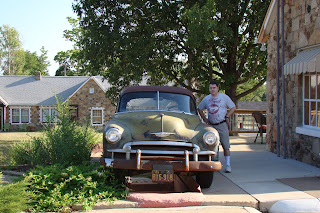 Sunday, June 24: Not much was open for travelers in search of breakfast on Sunday, so we wound up "Lovin' it" (not so much) at McDonald's. BUT on the way through Cuba to our morning meal we did get to take a look at Cuba's other Route 66 claim to fame: Murals all over the town.  In fact, according to one brochure, Cuba is known as "Mural City."  Buildings all long Route 66 are decorated with scenes of apple-processing (1), Amelia Earhart (2), a cottage-style filling station (3), Cuba's Gold Star Boys (4), the first Model T in Cuba (5), Civil War battles in the area (6), a tractor supplier (7), and Bette Davis (8).

1. From 1895-1920, Cuba was the largest producer, processor, & distributor of apples in Missouri.
2. Amelia Earhart made a forced emergency landing in Cuba on September 4, 1928.
3. Paul T. Car build the cottage-style filling station in 1932.
4. Cuba's "Gold Star Boys" served in World War II.  Mural shows them on the Blue Bonnet Frisco Train, which took Cuba's service men to join the war.
5. Mural shows A. J. Barnett, first cashier and President of the Peoples bank from 1920-59, cranking the first Model T in Cuba.
6. Five murals depicting the conflict between the troops of Confederate General Sterling Price and Union General Thomas Ewing in September 1964.
7. During the tenure of Al West, Sr., Cuba's mayor from 1946-58, the city was modernized with electricity and water/sewage systems--this brought factories (such as the tractor manufacturer) to town.
8. In 1948, Academy Award-winning actress Bette Davis and her husband arrived in a Packard station wagon and stopped at the Southern Hotel. Reporter Wilbur Vaughn asked for a photo.  When the actress refused, he snapped one anyway and was chased by Davis' irate husband.  The photo later appeared in the Cuba News & Review.

After breakfast, we continued our journey on the curving, wooded section of Route 66.  We stopped to take a picture of the "giant" Rocking Chair at the US 66 Outpost in Fanning and passed an incredible amount of grape stands--not fruit stands, just grapes.  We also passed the "giant" (not-so-much) Dripping Faucet --a neon sign that may have advertised a plumbing company (?)--that we thought we could live without a picture of.  It's possible it's more impressive at night.  Our guide book also told us to watch out for an original A&W Hamburger family in St. James (remember the Papa, Mama, Teen & Baby Burger?), but if it was still there we managed to miss it.  We did stop at the Mule Trade Posting to search for Route 66 memorabilia and to take a picture of the giant (truly) mechanical Hillbilly sign--his arms move like a windmill.

I loved this bit from the EZ66 Guide for Travelers (best road guide ever!) about out next section of road before entering Rolla: "the Outer Road (Route 66) from I-44 Exit 172 to Exit 169 is a bit rough so drive with care until it gets fixed! NOTE: A drug sting is at times operated at Exit 176 to catch alleged culprits that exit here after a sign warns of an upcoming 'checkpoint' on I-44.  Route 66 tourists shouldn't worry (just don't carry illegal drugs!)."

Rolling on through Rolla *tee hee* (I was singing the old "Rawhide" song "Rolla, rolla, rolla...keep those doggies rolling" all the way through town), we saw a half-scale replica of Stonehenge carved with high-speed water jets.  The University of Missouri at Rolla is also home to the first Nuclear Reactor in Missouri....but we didn't see that.  Our next photo op was after running along Hooker Cut to the Devils Elbow.  As we crossed over the 1923 bridge which crosses the Big Piney Rive, I snapped a picture of the Elbow--named for the bend that caused major logjams on the river. Just past the bridge, I insisted on stopping and rescuing a turtle who thought he was car.  At least he was traveling down Route 66....I moved him to safety in the grass along the side.   Next up was Waynesville and a big boulder jutting out of the hillside that was painted to look like a "giant" (sortof) frog.  We crossed the recently restored 1923 Rubidoux (I just like saying that...) Creek Bridge, headed through Laquey and Buckhorn, and then things got interesting....

At this point in the journey, your navigator (that would be me) lost her map-reading/sign-reading skills for the first of two episodes...OR, as I like to say, Missouri fell down on the job in signage.  Just after leaving Laquey/Buckhorn and entering the Mark Twain National Forest, we were supposed to follow MO AB to continue on Route 66.  There were all kinds of letters of the alphabet along that road (and NOT in alphabetical order, mind you, because that would take all the fun out of deciphering the directions), but not an AB to be found.  After cruising along through the Forest (which is quite pretty, by the way, and a good thing since we got to see more of it than we anticipated) for much longer than it seemed like we should have, I reacquired my map skills and got us headed back towards Route 66.  Only to run into road construction and a detour.  All-in-all, we spent about and hour or so becoming more acquainted with the Forest than planned.

Back on Route 66, we stopped at the "World's Largest Giftshop" (I'm not sure if that's true, but it is pretty darn big) for a break and to scope out prices.  I was justly proud of myself for buying what I did at the Mule Trading Post--everything was much cheaper there.  We continued on, crossing the Nangua River using a small green-girder bridge that took us to Marshfield.  Marfield is the hometown of Dr. Edwin Hubble, the noted astronomer and namesake of the Hubble Space Telescope. Then at about 5:30 pm ET we stopped in Paris Springs at the Gay Parita Sinclair Station owned by Gary Turner.  The station is a newer icon with an old-time feel and was built by Turner and named for his wife.  He has set the replica up with vintage cars and trucks, classic pumps, original-look station office and garage.  He even has a "mechanic" stretched out under one of the classic cars--"He's been working on the that car for four years...still doesn't know what's wrong with it."  Gary loves visitors and loves to talk, so if you go, be sure to allow plenty of time.  Gary will tell you all about Route 66 and give out tips on places to see, stay and eat as you head on your way.  He gave us free "Route 66 Sodas" (best cherry soda I've ever had) and took a picture of us holding a Route 66 flag.  Definitely one of our best stops.

Just before Carthage, we stopped for gas at the Flying W Store with its "flying manure spreader" sculpture by Lowell Davis--named the "Crap Duster." From there, the Route was closed for bridge repairs and Gary had directed us on a quicker detour than what was signed and we soon found ourselves in Carthage--home of the Boots Motel, world famous for its architecture, neon, and history.  Unfortunately, it is no longer serving as a motel and has been portioned into apartments.  But the architecture is still nice to see.  We also passed the iconic 66 Drive-In--recently recovered from years of being a junkyard.   Brad was in the mood for some Chinese and the our Route 66 Dining & Lodging Guide recommended the Bamboo Gardens.  Our take: not a good value for the price.  Most Chinese buffets include the drink--the Bamboo Gardens does not and they have a smaller range of dishes on offer than other buffets as well.  Skip this one and go for steak next time (as Gary advised us....).

We decided to take the "Old 66 Blvd" route from Carthage to Joplin.  This took us on a pleasant drive on curvy, narrow pavement and across a 1922 bridge.  We passed through very nice residential areas of Joplin and saw Poochies Rib Pit (in a very colorful reuse of a vintage gase station).  Crossing into Kansas, we passed through Galena and got pictures of the Rainbow Bridge--the last of three "Marsh Arch" bridges that were built on the Kansas section of Route 66.  Baxter Springs was our last city for the night--we passed the Cafe on the Route/Little Brick Inn which occupy a former bank that was robbed by Jesse James in 1876 and came to rest at the Baxter Inn.

If you'd like to see more pictures from our road trip, please click HERE.
Posted by Bev Hankins at 6:26 PM