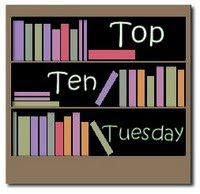 Top Ten Tuesday is an original feature/weekly meme created at The Broke and the Bookish. This week's topic is your top ten spooky/creepy/scary books for the season.

I'm not much into horror or spooky/creepy/scary books, but here's what I've come up with:

1. The Complete Stories of Edgar Allan Poe A few murders in the Rue Morgue anyone? A little Pit and the Pendulum action?


2. The Legend of Sleepy Hollow by Washington Irving. Nothing like a headless horsemen to creep you out.


3. The Halloween Tree by Ray Bradbury. It's been a long time since I read this one, so I'm not sure how scary it is. But it's certainly appropriately named.


4. Madam Crowl's Ghost & Other Stories by Joseph Sheridan Le Fanu. A collection of ghost stories from the mid- to late-1800s. Just read that recently. Click the title for a review.


5. Devil in the White City by Erik Larson. A little mass murder set around the 1893 World's Fair in Chicago. Very creepy.


And I loved the Alfred Hitchcock collections when I was in sixth grade. Just creepy enough to be fun. Collections like:


9. Stories to Be Read with the Lights On

I forgot one! I have to add a number eleven...

11. The Cabinet of Curiosities by Douglas Preston & Lincoln Child. How could I have forgotten one of the most horrific books I ever read? I don't normally do this kind of thriller but it kept me gripped and on the edge of my seat the whole time. It features a 20th-century NYC struck by killings that duplicate earlier murders, with the victims' spinal cords ripped away and clues pointing to a 19th-century scientist who sought the secret of immortality. Featuring fabulous locales, colorful characters, pointed riffs on city and museum politics, cool forensic and paleontological speculation and several gripping set pieces including an extended white-knuckle climax.

I really want to read Devil in the White City.

I'll have to look for the Hitchcock collections!

The Devil in the White City was a fantastic read!

Nice list. I've read a couple of them. I'm not much for scary books either.

Stories That Go Bump in the Night was scary! I've been wanting to read the Legend of Sleepy Hollow for a while... ever since I saw the freaky cartoon version of it haha!

Oooh good point. Devil in the White City did freak me out. And here I've been telling everyone I don't read scary books!

The Legend of Sleepy Hollow movie scared me enough, I doubt I would read the book! But Dracula by Bram Stoker is also on my list :)

I had to stop by and knew that you would have classics on your list. You are much younger than me, so I am not only impressed with all the classics that you read, but also that you remember all the books that you read. lol Some times senior moments become days, months, etc etc. lol.
CMash

Nice list - some books there I need to check out.

I'm not really into scary books either...but that's a list I think I could handle ;-)

Dude, Poe. That man had issues.

I guess Devil is just too scary for me. I have tried to read that one several times and I never get too far.

Oh, how could I forget The Legend of Sleepy Hollow? I had a little animated movie of that when I was a kid and I absolutely loved it. It's such a classic ghost story.
The Cabinet of Curiosities sounds really interesting. I'm going to have to add it to my To-Read list.