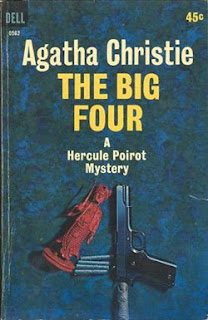 The Big Four (1927) by Agatha Christie....or "Christie does Sax Rohmer complete with evil Chinese genius and secret society." Also--Poirot does a Sherlock Holmes on his dear friend Hastings and co. So, yeah. I read this one long ago and far away during my big Agatha Christie binge--from elementary school through junior high. And I thought it was pretty good--of course, I think evil geniuses trying to take over the world have a greater appeal to a younger mindset. And I didn't catch the parallel to Holmes--with Poirot allowing his friends to think he was dead so he could work on catching the criminals.

This time around I found myself much less enthralled with Poirot taking on the secret society. I don't think Christie was at her best when she wrote thrillers, but I enjoy her thrillers more when they are stand-alones rather than inserting Poirot into the mix. There's still an element of fun in watching him track down the elusive Big Four and a bit of humor in the introduction of his brother Achilles. But I certainly can't give it the 3.5 stars my younger self handed out. ★★ and 1/2.


This book may not have had as great an appeal to my middle-aged self as it did to the younger me--but it is still WAY better than the Suchet production (keep in mind that I like Suchet as Poirot) and don't even get me started on the production of The Labours of Hercules (though I will talk about that in a minute...). I mean, megalomaniacs who want to take over the world make for good, over-the-top adventure when one is in the mood for it. But to take that and reduce it to the machinations of one guy who is out to impress a girl who rejected him several years ago? Seriously? I'm sorry, but no. Give me the honest to goodness evil geniuses any day.

And Labours of Hercules? They took an enjoyable series of short stories built around Poirot performing detective tasks in the mode of the tasks performed by Hercules smooshed several of them together (and left out others) to make a horrible mishmash whose point seemed to be to highlight Poirot's overweening pride, and to make the series even darker and more depressing. My little gray cells may not be all that, but even I knew immediately what an astoundingly bad idea it was for the guard to show the woman at the beginning the "secret" knock out in the open with a dozen or so people all around. And Poirot just stands there and watches her do it and didn't think a thing about it.

I think both of those adaptations were in the final season, which somewhat marred it for me. If it had been done earlier I wonder if they might have chosen a more faithful route. The Big Four is first a serialised story which lends itself to the thriller elements. But I think there is also a wave of detection which doesn't fully blend with the thriller-ness.

Yeah--making it a combo of detection with the thriller doesn't really work here. I just think Christie was at her best working out clever plots for standard detective novels. Spinning a thriller wasn't her best work.