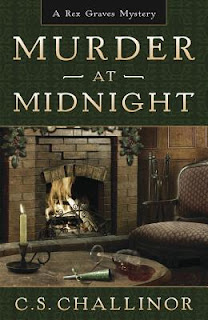 Murder at Midnight (2014) by C. S. Challinor provides mystery lovers with a good ol' murder at a country house isolated by a winter storm. Barrister Rex Graves has invited his friends, neighbors, and fiancée to a New Year's Eve dinner party at Gleneagle Lodge--his home in the Scottish Highlands. The treacherous weather has kept a few folks home, but he still has a good turn-out. Things get interesting when Ken and Catriona Fraser announce that they've recently brought the neighboring castle back into their family (there had been a dispute over inheritance rights) and that there may be buried Jacobite treasure there. Graves is concerned that a treasure hunt in the area will disrupt the peace and quiet of his Highland get-away, but a bigger disruption is in store. As the winter storm rages outside and clock rings in the New Year, the power goes out and the Frasers are found dead--apparently poisoned. The police are called in, but it may be a long wait till the officials can make it through the weather...so the barrister once again dons his amateur detective hat and tries to get to the bottom of the mystery. Were the Frasers killed because of the treasure? Or had they made enemies of another sort among their fellow guests? The suspects include include a real estate agent, a paramedic, a professor, an art college student, an interior designer, and a mysterious South American beauty.


This is the seventh book in the Rex Graves series and my first foray into the Scottish barrister's world. Challinor gives us a pretty solid mystery fashioned in the classic mode. We have a variety of suspects all cooped up in an isolated country house. Even those who ought to be innocent have a secretive air about them, providing red herrings to be eliminated (or not....). It's a fun, escapist read that requires little effort on the part of the reader (no intricate puzzles to solve). It is a shame that the motive is so very weak for the culprit....if it had been stronger, the rating would have been higher. As it is...★★★

A few parts of the story intrigue me. :)
Great review!

I read the first in the series and that was a total washout. Good to hear that this one is interesting.