The Babes in the Wood: Mini-Review 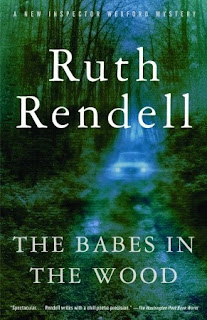 Synopsis According to Kirkus Reviews:

Chief Inspector Reginald Wexford’s stellar 19th case hinges on the disappearance of a pair of teenagers and their babysitter. Torrential rains have swelled the Kingsbrook beyond its banks, and all over Kingsmarkham the waters are rising. As Dora Wexford worries whether their garden and house will escape the flood, her husband is called to the home of Roger and Katrina Dade, who awoke the morning after they’d returned from a weekend away to find that Giles, 15, and Sophie, 13, weren’t asleep in their beds, and Katrina’s friend Joanna Troy, whom they’d left in charge of the children, had vanished as well. Have they all drowned, or do a T-shirt of Giles’s and a dental crown that might be Joanna’s point to a still darker fate? Roger’s missing car is discovered a week later with a corpse inside, but, in a cruelly comical twist, Peter Buxton, the rising media tycoon who finds it, neglects to report it to the authorities. So Wexford and Inspector Mike Burden (Harm Done, 1999, etc.) start digging into the backgrounds of Katrina and the Dades, and their discoveries give a new spin to the term “family values.” Long before the final stunning (and unguessable) surprise, Wexford’s had to face the likelihood that whatever became of Giles and Sophie, they were anything but babes in the wood. Sex, drugs, religious mania, dysfunctional families—and not even Wexford’s own domestic circle is safe this time.


My Take: Stellar??  Unguessable? Kirkus must have been asleep at the wheel when reading this one. This is a slightly less than average effort by Rendell. It's pretty obvious "whodunnit" and the investigation is way more meandering than necessary. Other than providing the hysterical mother of the missing kids  something be hysterical about (Oh, no! The floods! The kids have drowned....I just know it!) there's no point to the whole flood story in the book. The hysterical mother could have been just as hysterical without the rising river...and maybe the plot would have been a bit more on point. And, honestly, I get a little tired of the "repressive religious" people who so often get thrown in as suspects whether they actually did it or not. (Did they? I'm not telling.) The rendering of Joanna's character is interesting--not a standard female type. And Rendell's writing itself is still very good at this stage--I just wish the story had been a little more straight-forward--more true red-herring sidelines and less flooding and family drama for the Wexfords (will Wexford's daughters ever have a happy life?) would go a long way. ★★ and 3/4.

Thanks for the review. Are there any Ruth Rendell novels you would recommend on the strength of the mystery puzle? I've only read one title - albeit a late Wexford - and it was underwhelming at best.

Most of my reading of Rendell came about twenty-thirty years ago, so my sense of the strength of her puzzle plots is a bit murky--but I rated Death Notes quite highly from that period. Of the more recent reads, I though Shake Hands Forever was pretty good--it's an earlier Wexford book that my library apparently didn't have when I was first reading her.