The Skeleton in the Clock: Review 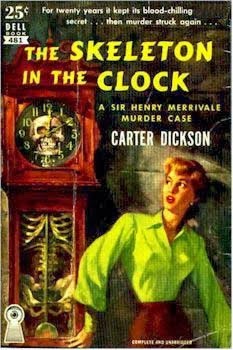 The Skeleton in the Clock by Carter Dickson (John Dickson Carr) is the eighteenth mystery starring Sir Henry Merrivale and it features murder past and present.  Twenty years ago Sir George Fleet took a tumble off the roof of Fleet House while watching the local hunt. When witnesses with binoculars and a telescope swore that no one came near him before the fall and no one was on the roof after, Sir George's death is put down as an accident.  More recently, three postcards are delivered to the notice of Sir Henry Merrivale and Chief Inspector Masters that suggest that perhaps someone got away with murder.  They are directed to investigate the skeleton in the clock, to figure out what the "flash of pink" on the roof was, and to find the evidence of the murder that is still there.

They arrive on the scene just at the time that Martin Drake has made a bet with Stannard, a middle-aged lawyer, about spending the night in the execution chambers of Pentecost Prison.  The two men--along with Ruth Callice who likes Martin but is liked more by Stannard--have been discussing psychic phenomena and supernatural influences and have come up with the execution chamber as the most likely spot for spirits with unfinished business to hang out.  As soon as they have fulfilled the terms of the bet and spent the night at the prison, a young girl is found murdered below the "long drop" and Drake is the victim of a murderous attack.  An attack that fails only because of H. M.'s foresight.  By the end of the story, H. M. will have found the skeleton in the clock and discovered its secrets; he'll solve the mystery of the pink flash; and will run the murderer to earth in the middle of a house of mirrors.  All while holding an ongoing duel with Lady Brayle, the domineering and commanding friend of the Fleet family and grandmother to Drake's lady love--it's worth the price of admission to watch the three-act mini-drama between H.M. and "Sophie."

There's a good deal of the usual Merrivale antics and humor--this time all in good fun and fairly enjoyable  There are clues to be had, although the solution to the rooftop mystery is almost too much to swallow.  I can just accept it--with the right amount of suspension of disbelief.  The thing that keeps this one from being one of Dickson's (Carr's best)--for me, anyway--is that I spotted the culprit as soon as s/he showed up.  And not for any of the reasons H.M. gives.  But....

****SPOILER---I have finished my sentence below in a light color if you don't want a clue that will narrow the field down for you.  If you don't mind reading it, then just highlight the section below and it will magically appear--just like "disappearing ink.******

Because, knowing how Dickson (Carr) loves to throw in the romance....I knew it just had to be her/him so the path of true love could run straight.

Overall, a light fun read coming in at three stars.


This fulfills the "Set in England" square for the Golden Vintage Mystery Card. 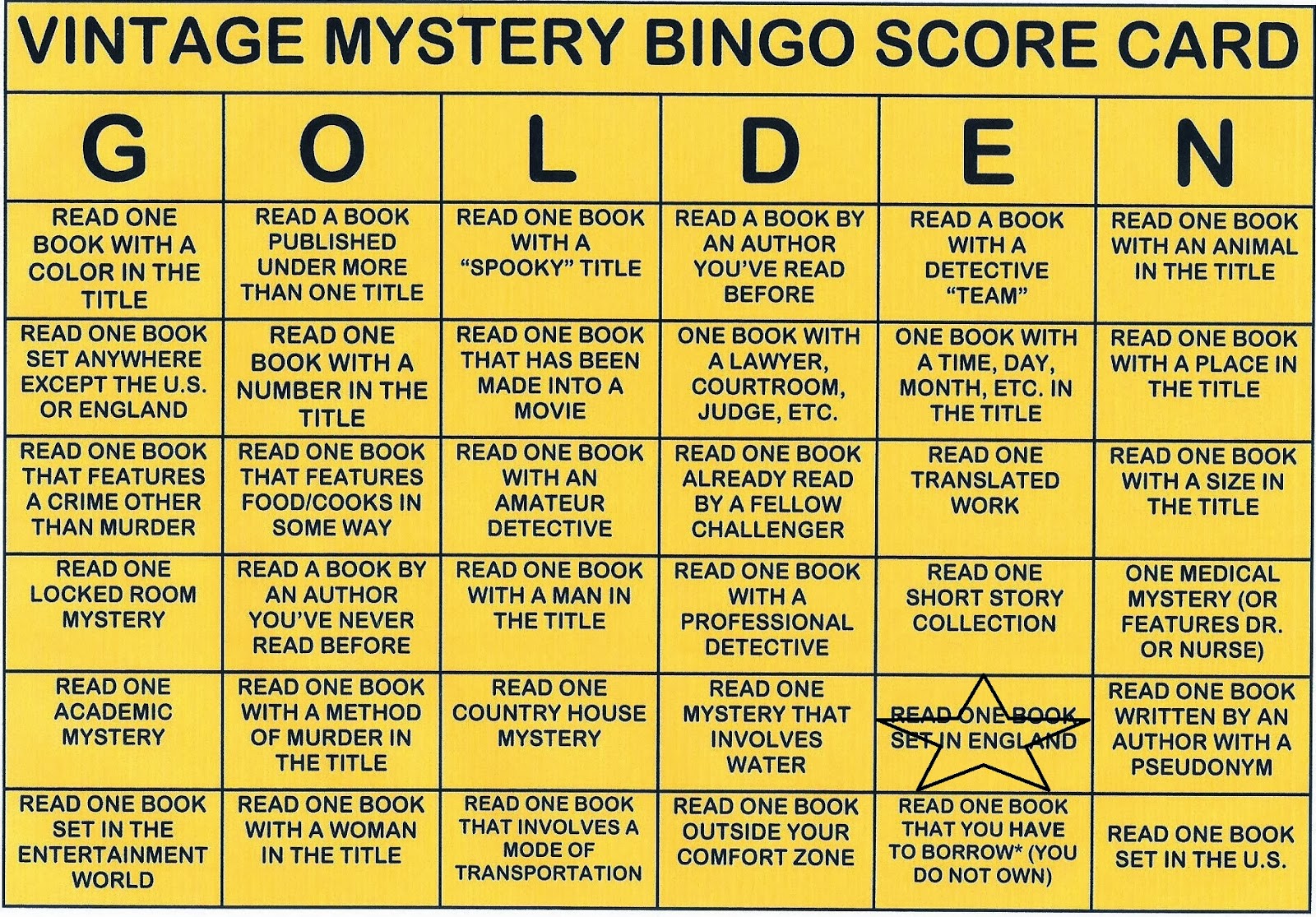 This Dell mapback was the very first vintage mystery I ever purchased. After learning about the Dell mapbacks in MURDER INK I wanted to start collecting them. I was 15 and I bought it via mail order from an ad in the back of Ellery Queen's Mystery Magazine. Look what it did to me! I now own close to 3000 books (probably more), including three boxes of Mapbacks.

I can't remember reading The Skeleton in the Clock (even after reading your review), but I'm sure I did.

(Deleted the previous comment due to a mess of typos)

Great stuff Bev - I just love Carr / Dickson anyway and simply must re-read this now - thanks.

John: I got The Skeleton in the Clock mapback at that delightful used bookshop in Virden, Illinois (that we discovered on our Route 66 trip). Just one of the many treasures I've brought home from there.

Sergio: I did enjoy it. I was interested to find reviews out on the interwebs indicating that this isn't considered very good--it's not one of the absolute best, but I thought it a very good read.

Great review, sounds like a fun but semi-predictable mystery. Sometimes that is what I look for though.