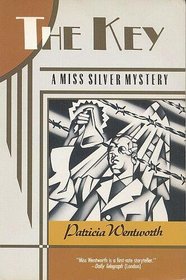 It's the 1940s.  World War II is raging and a Jewish refugee in England is working on a substance that could give Britain an edge in the war.  Michael Harsch has worked for years trying to perfect his work and now he's finally ready to turn it over to the War Office.  He calls Sir George Rendal to let him know of the success and makes arrangements to turn his findings and all his notes over the next day.  It's an appointment that he'll never keep.  Harsch goes to the church to relax with music and is later found dead beside the organ. And a German pistol is found beside him. The door is locked and key is in his pocket.  There are other keys--but they all seem to be accounted for.  A coroner's jury brings in a verdict of "suicide while the balance of his mind was disturbed."  But Harsch's friends don't believe it and Janice Meade calls in Miss Maud Silver to find out the truth.  Miss Silver's years as a governess have given her plenty of insight into human nature--a skill that she turns to her advantage as a private detective.

While it is true that Patricia Wentworth's Miss Silver mysteries tend to run on a certain formula--someone dies; either it's mistakenly called suicide or an innocent person is fingered as the culprit (sometimes both happen in quick succession in the same story); former client or former charge of the governess suggests bringing in Miss Silver; there is a young romantic couple (or two) who need things straightened out so they can live happily ever after; and the police repeatedly go down blind alleys while Miss Silver whips clues out of her knitting bag faster than she can knit one of her endless supply of socks, baby layettes, etc.--she has a knack of description and a grasp of character that make each outing seem fresh and new.  She also has quite few tricks in her own bag.  I changed my mind repeatedly on who the culprit was and just barely managed to settle on the correct one before Miss Silver did.  It's always pleasant to be fooled for most of the book and then edge out the detective by a nose at the finish line.

This particular outing begins like a spy thriller--and there is always the possibility of enemy agents seeking to gain control of Harsch's discovery--but Wentworth never really takes us out of the cozy realm.  The events are firmly lodged in the typical British villages with all the trappings and Miss Silver plays the part of the talkative older lady to the hilt.  It's amazing how she shrewdly leads witnesses to produce evidence that the police would never be able to pry out of them with a crowbar.  I thoroughly enjoyed my visit to war-era Britain.  A satisfying read and nicely plotted mystery for four stars.

Quotes:
You know, when there has been what you might call a tragedy--when you have lost someone, not in the ordinary way of death but in some way that puts fear into the imagination--it becomes so difficult to talk about the one that you have lost. There is too much sympathy--it makes an awkwardness. [Michael Harsch] (p. 8)

She had much love given to her, and if at the end there was pain, I do not believe that it could blot out the happiness.... [Michael Harsch] (p. 8)

Miss Perry, her name was, and she could do all sorts of entertaining things--telling fortunes from cards, and writing with planchette. All great nonsense of course, or I used to think it was, but really very entertaining. You know, you do get tired of knitting, and the libraries always seem to have so many books that no one could want to read. [Miss Sophy] (p. 21)

Garth burst out laughing. Aunt Sophy had a shrewd streak which sometimes showed quite unexpectedly. (p. 21)

He didn't like the way in which the old dear had come by Miss Medora Brown. Coffee grounds and cards are not really a substitute for first-class references. (p. 32)

MS: I like Miss Mottram. She is always so pleasant.
MD: She hasn't the brain of a hen.
MS: Perhaps not--but there are such a lot of clever people and so few pleasant ones. [Miss Sophy; Miss Doncaster] (p. 59)

They stood still for a moment. There was at once too much and too little to say, and none of it could be said within earshot of half the village streaming home. (p. 60)

But, Janice, don't you see that when something pushes a man off his balance, that' s just what he does do--he acts out of character. It isn't normal for a man to pitch on his head or go down on his hands and knees, but if his physical balance is upset, it may happen. And when it comes to mental balance, well, it's the same thing, isn't it? Normal motives and restraints cease to operate, and he does the last thing he would dream of doing if he were himself. [Garth Albany] (p. 65)

If men knew how very foolish they appear when they allow a silly young woman to twist them round her little finger, it would at any rate preserve them from exposing themselves to ridicule in company. [Miss Doncaster] (p. 77)

Poor dear Medora! And she won't tell me anything--not anything at all. She doesn't even cry. You know, it really does you a great deal of good to cry when you are feeling unhappy. [Miss Sophy] (109)

And what call have you got to go bringing down the London police after that? Let them stay at home and mind their own murders, I say, and not come ferreting and worriting where nobody wants them. [Mrs. Bush] (134)

Very correct--aren't you? When you start saying sir every time you open your mouth, I begin to look out for what you've been up to. [Chief Inspector Lamb] (139)

When something has happened it is no use trying to remain in the past, or to refuse to accept what the present demands of us. [Miss Silver] (142)

Miss Silver looked at him reprovingly. Her manner indicated that discourtesy relegated one mentally and morally to either the nursery or the slum. (196)

Labels: 150 Plus, A-Z Challenge, A-Z Mystery Author, Cruisin' Thru the Cozies, Mount TBR, Off the Shelf, What's in a Name

I recently tried to re-read a Miss Silver and found my mind wandering. But this one sounds very engaging, Bev. I'm going to give it a try if I can find a copy. You know how I love that era, especially set in England and in a village, to boot.

I love the quote about there being plenty of clever people but very few pleasant ones. :)

This one is good....I think her earlier ones are better.