The Anatomy of Death: Review 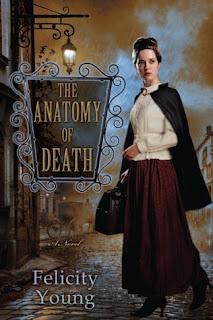 The Anatomy of Death is the first in a new series by Felicity Young.  It features Dorothy (Dody) McCleland, a young woman who has gone into the medical field at the turn of the twentieth century.  Denied the chance to become a surgeon for the living (because of her sex), she trains as an autopsy surgeon and becomes England's first female doctor of this type.  She has just returned to London from her studies in Scotland--all set to take up her post as an assistant to Bernard Spilsbury--Scotland Yard's autopsy surgeon--and is greeted at the train station with a note calling her to her very first case.  The Superintendent of Police is none too pleased to find that his new "man" is a female surgeon, but Spilsbury is out of town and unavailable, so he lays the facts before her.

What started as a peaceful protest in support of voting rights for women turned very ugly indeed when roughs and toughs from the dock area were incited to assault the marchers.  Three women are struck down in the violent attack--including one of the prominent suffragettes.  Dody must excuse herself from the autopsy because the woman, Lady Catherine Cartwright, was a friend of her sister.  However, when it is rumored that the death was actually from police brutality and it seems that the incident is going to be swept under the carpet, Dody begins working on her own to determine whether the rumors are true.  She earns the trust of Chief Inspector Pike--who has his own reasons for looking into the events of that day--and the two of them gather clues to determine whether a police officer let his emotions get the better of him or if the killer is closer to home.

This is an interesting start to a very promising historical series.  The time period is an intriguing one--right at the turn of the century and watching the fight for women's rights.  There are so many things that women today take for granted now that were just being thought of and fought for.  Dody is a pretty strong character--although it is evident that there is much room for growth.  I thoroughly enjoyed getting to know her and look forward to future installments.  I found her and the other central characters believable and interesting.  The mystery itself had a nice twist and it was pretty fairly clued.  A solid opening and worth three stars.

[Unfortunately, I wasn't able to write up this review as soon as I finished the book (8/10/12)--I had to run away and play in Chicago this weekend--so it's a bit shorter than usual.]

I saw this on goodreads and was immediately intrigued. I love the sound of the setting and I'm always up for a new mystery series with potential. Thanks for the review!

This looks really good & I LOVE the cover. Thx!