The Innocence of Father Brown: Review 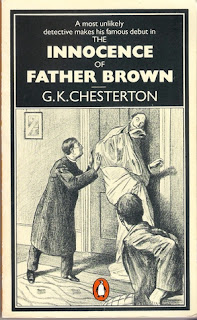 I'm not entirely sure how I feel about G. K. Chesterton's The Innocence of Father Brown.  Part of that may be due to the fact that I feel just plain icky at the moment because of either a summer cold or allergies; it's a bit hard to think when one's head is all congested.  But, if a review is to be done, then it must be done while the reading is fresh.....

Chesterton can certainly weave an interesting and mystifying tale.  Of course, part of the reason most of the short stories in this collection are mystifying is because they are so improbable.  And the clues aren't necessarily all on display in the way a fan of Golden Age crime would like.  It would be difficult--at least it was for me--for the reader to anticipate the solutions before the priest unravels the mystery.  But Father Brown is an endearing character and Chesterton uses such marvelous descriptions of place and weather and people that I didn't mind...too much.  Another sign that I really appreciated Chesterton's writing is the number of interesting and insightful quotes I managed to pick up for my collection (see below).

As a mystery collection, it is very solid--offering entertainment and improbable crimes, and even one locked garden mystery a la Carr.  Enjoyable, but not off the charts--so three stars.

Quotes:
That woman's over-driven; that's the kind of woman that does her duty for twenty years, and then does something dreadful. [Father Brown] (p. 137; "The Wrong Shape")

The people who wrote the medieval ballads knew more about fairies than you do. It isn't only nice things that happen in fairyland. [Father Brown] (p. 152; "The Sins of Prince Saradine")

...one can sometimes do good by being the right person in the wrong place. [Father Brown] (p. 156; "The Sins of Prince Saradine")

What is the good of a man being honest in his worship of dishonesty? [Father Brown] (p. 226; "The Sign of the Broken Sword")

A window in Merton's mind let in that strange light of surprise in which we see for the first time things we have known all along. (p. 235; "The Three Tools of Death")

If I ever murdered somebody, I dare say it might be an Optimist. [Father Brown] (p. 236; "The Three Tools of Death")

I've read one Father Brown book and enjoyed it. I'm not sure why I haven't picked any others up yet.