I have signed up for a second year of The Alphabet in Crime Fiction, a community meme sponsored by Mysteries in Paradise. Each week she'll be expecting participants to produce a post featuring a mystery/crime novel or novelist related to that week's letter.

I'm being good this week and staying with the group. So, I'm all set to tell you about my choice for the Letter O.  O is for O' Artful Death by Sarah Stewart Taylor. 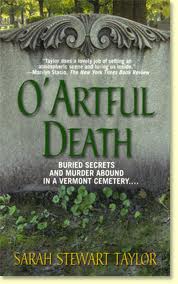 O' Artful Death is the debut novel in a mystery series starring Sweeney St. George, an art historian from Boston who teaches on the art of death.  She has had a life full of difficult, emotional relationships and prefers to put all her energy into teaching and her interest in cemetery art.  Her best friend shows her a picture of a beautifully carved gravestone that looks more like a statue than a headstone and Sweeney is immediately intrigued by the oddities of the piece.  The headstone incorporates imagery that is out of place for the time (Victorian era) and she is even more interested when she finds that there are rumors that the young woman whose grave it marks may have been murdered.

Her friend reveals that the stone is located in a cemetery near his home and he invites Sweeney to spend Christmas with his family and friends.  Reluctant to be mixed up in a family atmosphere, she first calls the descendent of the dead woman to find out more of the story.  Their conversation is interrupted and when Sweeney calls back the next day, she finds that the woman has died--apparently of a self-inflicted gun shot.  The art historian decides that there are too many mysteries for her inquisitive scholarly mind to pass up and she heads wither her friend to a mansion in the historic Byzantium Art Colony.  She plans to investigate the local archives and question any long-standing residents to see if she can hunt down the artist who created the piece.  She doesn't expect to stir up ancient crimes with a link to those of a more modern nature....and she certainly doesn't expect to find her self in danger of joining the dead in the mysterious graveyard.
This is a very decent first novel.  Sweeney is a flawed central character with lots of backstory and lots of emotional issues to work on in future novels.  She's a smart woman and walks the fine line between the classic damsel in distress (walking into all sorts of danger without letting anyone know what she's doing) and the ultra-confident, "expert" amateur who can take on whatever villain may come and never have a problem.  There are several red herrings--one commenter on Goodreads seems to think there's only one and it's TOO obvious--but for anyone paying attention, there are more.  I managed to latch on to the main clue/s and knew who the culprit was before the grand finale, but I didn't figure out quite all of the story.  Kudos to Ms. Taylor for maintaining some of the mystification until the end.  I look forward to reading more of the series.

My husband first discovered this series because he likes cemeteries and gravestones. We have both read all of them. He liked them all and wishes there were more. I did not like the later ones as well as the first one. This is a good review. Definitely a series with an interesting theme. Wonder why she did not write more (than four).

It does sound good, Bev. And I love cemeteries and headstones too.

Bev - What a very interesting context for a mystery novel - the theme of cemetery art! It's definitely innovative and the plot sounds interesting too. Time for me to look that up.

I agree with Margot a very interesting setting-cemetry art! Sounds like an interesting book adding it to my TBR!

Wow, I've never heard of cemetery art before but it sounds fascinating. I love that they formed a mystery from it.

Sounds like a very different read. Would love to read it.

A different kind of protagonist. :)

Hadn't heard of this one at all Bev - and don;t think I've ever read a book with a character with this profession either so consider me intrigued!