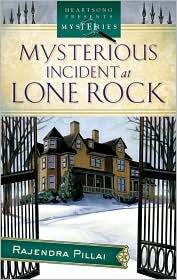 "A murder--it is like a math problem, you see." ~Chinni Roy

In Mysterious Incidents at Lone Rock by Rajendra Pillai, Chinni Roy, a visiting scholar and former police detective from India, gets the chance to prove his theories about murder.  He and his host, Professor Rich Harrison, are invited to spend a "relaxing" weekend in the country at the home of the university's Dean, Roberta Glasson.  Roberta is a long-time friend of Harrison's and has arranged a house party at her estate, Lone Rock.  Included in the party are other friends of Roberta's as well as Sir Melvin and Lady Martha Ellington--British diplomats.  Sir Melvin is a strongly (and adversely) opinionated man whose colonial outlook and abrasive comments soon manage to offend just about everyone in the house party.

A snow storm hits and before the first night is over, Lady Martha will confide to Rich and Roy that she believes her husband is trying to poison her.  Later that same night, a gunshot rings out.  Sir Melvin is dead and Lady Martha is standing over him with the gun in her hand.  Did she shoot in self-defense?  Or should they believe her story of an intruder who thrust the gun into her hand as she stood dazed?  The police are called in and Chinni begins constructing his math problem--lining up the facts and the variables in neat, orderly algebraic formulas.  But can a detective really solve for Y and come up with Mr. or Ms. X?  And what if there are too many variables to allow for a sensible solution?

Pillai's book is quite a mix--a Christian cozy with academic overtones.  No violence onstage and no strong language or gore.  The setting and the set-up show strong influences from Agatha Christie--from the snowbound house party to the foreign detective insisting on order and method.  Not quite emphasizing the working of the "little grey cells," but the echoes are definitely there.  And Harrison most assuredly plays the part of Captain Hastings or Watson to the detective.  Never quite seeing all there is to be seen and offering up solutions of his own that aren't quite right.  There are plenty of red herrings and twist and turns to satisfy the fans of Golden-Age-style mysteries.  It looks (from my brief researches on the internet) that this book (pub. 2008) is the author's only foray into the mystery genre.  That's a shame.  This is a good solid outing and the character of Chinni has great promise.  I would have enjoyed seeing a series and the development of the detective.  Three stars for a very nice debut mystery.

Labels: 150 Plus, 52 Books in 52 Weeks, Antonym Challenge, Cruisin' Thru the Cozies, Mount TBR, Off the Shelf, What's in a Name

Never heard of the author. But this book seems interesting so will look him up. I esp want to read the comments of Sir Melvin :)