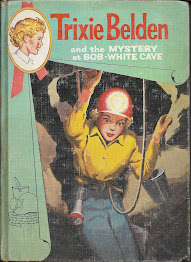 The Bob-Whites are on vacation again and this time they're visiting Trixie's Uncle Andrew Belden who just happens to own a lodge in the Ozarks*. When a rainy day forces them to stay inside, Trixie discovers a magazine article offering a reward for anyone who can find cave "ghost fish" (white, eyeless fish that live deep in caves) in caves in the Ozarks. She gets the Bob-Whites excited about earning a reward that could go towards one of their charity causes. The search winds up with Trixie nearly getting mauled by a wildcat; the crew saving a man from drowning; fighting a wildfire set by an arsonist; Trixie nearly drowning in a cave sinkhole (but finding ghost fish!); and getting to the bottom of the mystery of the long-haired man living in the nearby haunted cabin. This vacation is action-packed!

It's possible I wasn't in quite the right frame of mind when I read this--but Trixie kindof got on my nerves this time. I mean, seriously, she starts out whiny (again--I'm thinking of her talking about how bored she is at the beginning of The Secret of the Mansion and how she'll just die if she doesn't get a horse). Heaven forbid that it rain on her very first day in the Ozarks. And that she be cooped up in her Uncle Andrew's lodge for, what?, all of an hour or two? And then, when she spies an article about a reward for ghost fish in a magazine that she flips through to try and stop the endless boredom AND she has to wait until Uncle Andrew comes back to the lodge before trekking out to investigate caves that she's never been in before and might be dangerous in a grand search for the fish, she whines like a four-year-old who's been denied the cookies she's been demanding. I mean, Jeepers, how old is she? Doesn't she know better than to go barging off into unknown caves without proper equipment and maybe someone who knows more about spelunking than she does (which is very little)?

There...having gotten that off my chest, I feel better. I like Trixie--I really do. But she was a little much this time. Once I got past her being a bit miffed every time she had to wait one second to do what she had it in her head they had to do right now, I enjoyed the adventure--but not as much as when I read it back when I was in elementary school. At that time, I was really focused on the cave exploration and the various adventures and Trixie helping to discover who the strange man with the long hair was and I didn't notice how annoying her impatience was. This time Trixie's attitude overshadowed that a bit. I did appreciate how much she was focused on wanting to help others--her impatience is in wanting to find the fish, earn the reward, and be able to donate the money for a station wagon for children with special needs. And then how she and Honey help Linnie fix up her cabin after the fire.

The plot isn't quite as mysterious as some of my previous Trixie reads. And there's not a lot of detecting going on--more outdoor action than anything. I saw the solution (of who the man was) coming early on, but it made for a nice, happy ending. ★★★

First Line: "I hate rain! It's simply pouring down, and darker than night outside." [I bet you can't guess--after my review--who's talking here.]

Last Line: "Oh dear, I wonder if we'll ever have another project as exciting as this one turned out to be!"

*I'm a little curious about just how well-off Uncle Andrew is--he owns a sheep farm in Iowa (see The Happy Valley Mystery), but also owns a lodge in the Ozarks?

Now, if I remember correctly, there was also a teeny bit or romance between Trixie & Jim at the end of this story. I remember this book quite clearly and that must be because it was one of the ones I reread endless amounts of time, to savour the sweet teen romance!
And yes, there were times when Trixie's whiny, impulsive side could put one on edge :-)

Are you rereading all the Trixie's or just hand picking out your favs?
I gave my box of Trixie's to my niece a couple of years ago. It's nice to know they are still being loved, but it makes it harder for me to reread one impuslively.

I loved Tricia Belsen as a preteen, thanks for the memories

Brona: The book where the romance is most present is at the end of The Happy Valley Mystery. Jim gives Trixie a bracelet.

I've been collecting vintage editions of the books (to replace ones I had growing up that got ruined by getting too hot in our garage). Every once in a while I pick one out to read that fits a challenge or two...

Trixie is very whiny in Bob White Cave. It's not just you.

Thanks, Mark (and Brona). I'm glad to know it's not just me. I don't remember noticing it so much when I read it back in the day...