Bullet for a Star 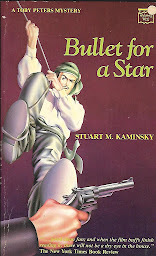 Toby Peters, Hollywood private investigator, debuts in this 1940s-era murder and blackmail fest. He's hired by Sid Adelman of Warner Brothers to make a blackmail payment drop on behalf of Errol Flynn. Someone has a photo and a negative of Flynn with a very young girl in a very compromising position. They're both naked as the day they were born. Adelman and Flynn both claim it's a fake, but they won't be able to prove it until they can examine the negative. So, Toby is hired to drop off the cash and take possession of the print and its negative. If anything goes wrong, he must not mention the studio or Flynn.

What could go wrong? He makes the scheduled appointment, hands over the cash, gets an envelope in return, starts to check the contents...and gets bashed on the head. When he comes to, his gun is gone, the blackmailer is dead--apparently shot with Toby's gun, and the cash and the photo envelope are MIA as well. His brother is a cop, so he manages to wiggle out of a murder rap, but his brother isn't exactly happy with the story he's been told. Which is, naturally, lies from beginning to end since Toby can't mention what he was really there for.

Peters sets off to find the original of the negative and the trail leads him through the film world and, eventually, to the set of The Maltese Falcon, where Bogie and Lorre are cast in roles they hadn't planned on. Errol Flynn gets to play they hero's role at the end, saving our P.I. from a final attempt on his life.

This is a fun romp through 1940s Hollywood for mystery and movie fans. It's also good for readers who like a bit of light hard boiled P.I. action. I must say, however, that Peters is pretty bad at being a tough guy hero--he gets shot at, knocked out, beat up, and framed for murder more often in one book than most detectives do over the course of a series--and Errol Flynn has to save him from the bad guy in the end. But it does make for entertaining reading. And the homage to the glittering silver screen stars of the past was really well done--the cameos didn't feel forced and definitely worked with the story. ★★★

First line: It was the summer of 1940, a hot August day in the San Fernando Valley, and I had doubts that my '34 Buick would even get to Warner Brothers.

Last Line: I ran for the door, without saying goodbye to Sid Adelman or Warner Brothers.