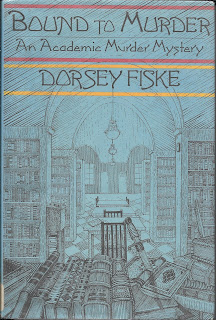 "That was a plaguy heavy book," Bunce declared. "You're lucky to have a harder head than most; it'd have cracked some skulls like an eggshell."

"Not Caldicott's Discourses on Socmanry. His theories are far too lightweight to do any real damage," scoffed Fenchurch...

Bound to Murder is the second of two academic mysteries featuring John Fenchurch a Fellow of the imaginary Sheepshanks College of Cambridge University. What begins as an investigation into the thefts of precious color prints from various antique volumes and then the disappearance of an entire rare medieval test from the university library, soon becomes a matter of murder when the alleged thief is found murdered on the night of one of the college's feast days.

An abundance of clues and an apparent eye witness makes things look very black indeed for a young history student, Harry Huntingfield whose very existence as a younger son of a noble family (even though impoverished) put him at odds with the left-leaning victim. But Fenchurch is convinced that the murder has something to do with the thefts and can't see any way of connecting Huntingfield to those. And when the beautiful Vivien, Harry's fiancee, begs Fenchurch (who is not immune to her charms even in his middle-aged bachelorhood) to prove Harry innocent, he must needs play the knight errant. He's also got the reputation of the college on his shoulders--what with murder and thievery and a bevy of ladies of the evening who crash the feast. A couple of last minute discoveries finally point the way to an unexpected culprit

A mid-range academic mystery saved by a very engaging amateur sleuth. Fenchurch is quite charming and I enjoyed the way he managed all sorts of personalities--from the sullen Mr. Maunders (our victim) to the charming Vivien to the somewhat gaga emeritus professor who occasionally likes to be addressed as Geoffrey (Chaucer, that is). He also has an interesting relationship with the local police in the person of Inspector Bunce. The two make a good team.

Fiske does a fairly good job of spreading red herrings about and making several suspects behave in a most suspicious fashion--all but one for perfectly innocent reasons (at least as far as murder goes). One spoilerish quibble (highlight the following, if curious): I don't think Fiske or her publishers or whoever is responsible could have chosen a more spoilerish title if they'd planned it. Once anyone figures out what that title has to do with the plot, it's very likely they'll know whodunnit. But overall a very pleasant read. ★★★

Added 9/21/20: One thing I meant to mention: Dorsey Fiske must be a Dorothy L. Sayers fan. I noticed several parallels between the Harry Huntingfield/Vivien Murray romance and Lord Peter/Harriet Vane. Harry meets Vivien and immediately falls head over heels in love--proposing marriage right off the bat. Of course, Vivien isn't suspected of the murder, but Harry is and she immediately seeks a way to clear him of suspicion. Since she doesn't have the obstacle of feeling grateful to overcome (as Harriet does), Vivien succumbs to Harry's charms much quicker. The witty back and forth word play between the two is also reminiscent of LP/HV.

First line: I am afraid there can be no doubt of the fact he was murdered; no doubt whatever.

Last line: Ah, well, I daresay he forgot the time--far too busy beating his wife.

Deaths = 2 (one stabbed; one fell from height)

The setting of this one sounds intriguing to me. Thanks for the review!

Gretchen: I love mysteries with an academic setting and this one is pretty good.