A Child's Garden of Verses (...and more) 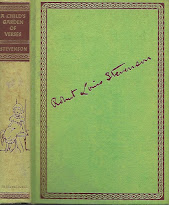 A Child's Garden of Verses by Robert Louis Stevenson

I grew up with a shortened, Golden Book style edition of this book. I loved that book very much (and still have it buried somewhere in a box of my son's things--having given it to him when he was young) and it was nostalgia for those simple childhood verses that influenced my purchase of this longer edition which includes his Garden of Verses poetry as well as the poetry collections "Underwood" and "Ballads" and two short stories which I had previously read, "The Sire de Maletroit's Door" and "The Bottle Imp."

I found the verses aimed at children still very sweet and charming. The poems "The Land of Story Books" and "My Shadow" are especial favorites. And I'm sure my sense of having loved these so much when I was growing up still influences me--because, honestly, Stevenson was a much better prose writer than he was a poet. Especially when it came to the poems in other two collections which seem to be aimed at a more adult audience. These poems are cumbersome and burdened under his wont for description. His descriptive prose serves him well in short stories and novels, but makes his poetry seem heavy and more difficult to read through. His "adult" poems are really not my cup of tea. 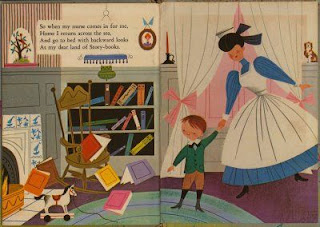 The short stories are two of his best. Each features a protagonist faced with life-altering choices and it is interesting to see how Stevenson works out the problems. "The Sire de Maletroit's Door" centers on a fun-loving cavalier who stays out past curfew one night and finds himself followed by the night watch. Rather than face the music, he slips through an unlocked door to avoid a reprimand. He has no idea that the unsecured door was a trap designed to ensnare the lover of a young woman who lives in the house with her uncle. Uncle takes a severe view of her dalliance, doesn't believe that the cavalier isn't the man in question, and calmly tell him that if he doesn't agree to wed the girl then he will be killed before morning. Will the cavalier take honor to the extreme--dying rather than forcing an unknown and unwanted husband on a lady whose heart belongs to another? "The Bottle Imp" features Keawe, a poor native Hawaiian, who buys a magical, unbreakable bottle which contains a wish-granting imp. The catch? If Keawe cannot sell the bottle for less than he has paid and do so before he dies, then his soul belongs to the devil and will be bound for hell. He decides to risk it and uses the bottle only to own a beautiful home and prosperous land on his home island and immediately sells the bottle. Then several years later he falls in love and asks the young woman to marry him. Life will be even more perfect now. But the morning after his proposal, he finds that he has broken out with what the reader assumes is leprosy (the ailment is not named directly). He decides to hunt down the bottle again, but finds himself in an impossible position--he can buy it, but if he does (at the price of one penny) it seems it will be impossible for him to sell it. Will he risk his soul for love? Is there any way out of this devil's bargain if he does?

★★★ for the collection--primarily saved by the charming poems of my childhood and the two excellent short stories.

Stevenson's adult poems are not his best work, by-and-large, but his own epitaph is justly famous:

Under the wide and starry sky,
Dig the grave and let me lie.
Glad did I live and gladly die,
And I laid me down with a will

This be the verse you grave for me:
Here he lies where he longed to be;
Home is the sailor, home from sea,
And the hunter home from the hill.

Yes, the epitaph is very good. The rhythm of the poem is much in keeping with the Garden of Verses poetry (rather than Underwood and Ballads).