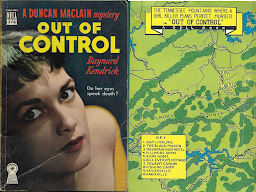 Out of Control (1945) by Baynard Kendrick

The sixth mystery featuring Captain Duncan Maclain, blinded during the war and who has since refined his remaining senses to become a brilliant detective. His preference is for impossible, near-perfect crimes ("near" because, of course, our hero always solves them). This outing finds Maclain on his honeymoon in the Great Smoky Mountains where he comes up against a killer who uses a perfect murder method one too many times. When Walter Crane is found dead in an apparent auto accident, the local Sheriff asks the famous detective to lend a hand. Maclain soon realizes that it will be difficult to bring the crime home to the villain and devises a clever plan to trap the culprit.

While I generally enjoy Kendrick's mysteries and the character of Duncan Maclain in particular, I found this one less to my taste. I'm not a big fan of the inverted mystery and I was disappointed to discover that we know from the opening chapters who the villain of the piece is. And since this is inverted and we see most of the action from the culprit's viewpoint it means that Maclain enters the story much later than in the previous Kendrick novels I've read. The best I can say for this one is that it is an interesting character study of a person spinning out of control. The murderer is quite sure that they have everything all sewn up even as they proceed to fall apart emotionally and it is fascinating to watch. Those who appreciate a good inverted vintage mystery will most likely rate this higher, but for me--★★★.

First line: The perpetual purple mist from which the Great Smokies derive their name, circled the mountaintops and bunched together into a great gray storm cloud.

Last line: God what fun it was to kill and to be free of Duncan Maclain!