Into the Valley of Death 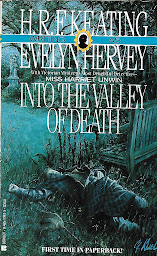 Harriet Unwin is a governess in Victorian England who manages to get herself tangled up in mystery and mayhem--beginning with the first book (The Governess) where she must prove her own innocence. She's done so well at pointing out clues and connections that the authorities have missed, that it's not unusual that her childhood friend, Vilkins (a housemaid in a country house), calls upon her to help a man who has, she says, been wrongly accused of murder. This time is very different, however. Jack Steadman has already been to trial and is due to be hanged in less than a week's time. His wife is absolutely sure that her husband didn't do it--not that he couldn't kill a man, for after all he had been in the Crimean War, but that he wouldn't be a coward and shoot a man in the back.

When Alfie Goode was found dead, shot in the back, lying nearby was Jack Steadman--knocked out cold, apparently from stumbling over a root (or some such)--with his own discharged rifle beside him. In Jack's pocket was a note signed by Goode arranging for a meeting in the wood. Jack swears that he never saw the message before and that he was walking in the woods when he was struck from behind and knew no more until they awakened him.

Fortunately for Vilkins and the Steadmans, Miss Unwin is available for a trip to the country because her charge is on a family visit and her services aren't needed for a while. So, she makes the journey to Chipping Compton, but when she hears the facts of the case and reads the detailed account of the trial in newspaper clippings that Mrs. Steadman had collected, she offers very little hope. The evidence very clearly pointed to Jack. After talking with his wife, she becomes convinced of the man's innocence but doesn't see any way of finding proof.

Miss Unwin begins "snooping," pretending to be a ladies magazine writer looking for details to write a sob story piece about the poor little wife who will soon be all alone. She's barely begun when she meets her old friend (though at one time her pursuer when she was thought guilty of murder) Inspector Heavitree in the village. The two team up and soon their questions begin to make people uncomfortable. When it becomes clear that one of the key witnesses in Steadman's trial has been telling lies and then he winds up dead, they know they're on the right track. But will they find enough evidence in time to save an innocent man?

This is a very light historical mystery. No intense detection and no intricate plot--but it is enjoyable and Miss Unwin is an interesting character. Once she has given her word that she will investigate, she doesn't let anything stand in her way--not threats from certain parties or doubts from skeptical men. I also appreciate her interactions with Vilkins, Heavitree, and Mrs. Steadman very much--well, mostly (after the story is full-steam under way). The one thing that will keep my rating mid-range is the beginning. The way the details first get told to Unwin by Vilkins and Unwin's responses to her are infuriating. There surely was a better way to handle that conversation--it makes Miss Unwin appear to be a nitwit instead of the observant person who will save the day for the poor Steadmans. ("What do you mean, Vilkins?" "I don't understand a thing.") But I'll tell you right away that I will take Keating writing as Hervey over any fiction I've read under his given name any day of the week and twice on Sunday. To date, I've read two under Keating--the first rated a dismal one and a half stars and the other I couldn't even finish properly. A quick, fun read. ★★★ and a half

First line: Miss Unwin took a hansom. If she could get to the Paddington Station in a quarter of an hour, she calculated, she might yet catch the only train that would get her before late evening on this Sunday to the Valley of Death.

Last line: I am no more than a simple governess, and it is to nothing more erudite than the Rev. C. P. Wilkinson's Heroes of the Crimea, told for boys, that I owe my knowledge of what happened in the days of the real Valley of Death.