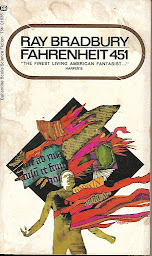 Fahrenheit 451 (1953) by Ray Bradbury is story of a dystopian future that is every book lover's nightmare. Guy Montag is a fireman--but not the kind children we have all known have always dreamed about being when they grow up. Firemen in Montag's world don't put out fires--they start them and they mostly start them wherever there are books, because in this world books have been outlawed and any that are found are burned.

Up till now, Montag has been pretty happy as a fireman--but encounters with Clarisse, his seventeen year-old neighbor, and their discussions about simple pleasures, his wife's suicide attempt, and a book-burning that results in the self-immolation of an elderly book hoarder all contribute to a growing set of doubts about his chosen profession. It isn't long before he's hoarding books and finds himself on the wrong end of a Mechanical Hound (a robot used to track bookish lawbreakers) hunt.

It's been a long time since I read this the first time--back when I was haunting Mason's Rare & Used Book Store in my hometown and spending all my hard-earned lawn-mowing money on classic science fiction...Bradbury, Asimov, Ellison, Silverberg, Tiptree and the like. I read Fahrenheit then because I wanted to read all of Bradbury that I could get my hands on after my first sip of his Dandelion Wine collection. And was absolutely amazed by it. I was surprised that it never got assigned in school (neither high school nor college).

This reading seems very timely in an age when social media takes up so much of our time, when there are literally thousands of television programs available at any one time, and when I regularly see articles stating the percentage of people who say they haven't even read one book in the last year. Books are such an important part of my life and have been since I learned to read. I can't even imagine what it would be like to live in a world where owning books...any books, not just certain banned books...was illegal. An incredible (if bleak) vision of the future by a SF master. ★★★★★

First Line: It was a pleasure to burn.

Always before it had been like snuffing a candle. The police went first and adhesive-taped the victim's mouth and bandaged him off into their glittering beetle cars, so when you arrived you found an empty house. You weren't hurting anyone, you were hurting only things! And since things couldn't really be hurt, since things felt nothing, and things don't scream or whimper, as this woman might begin to scream and cry out, there was nothing to tease your conscience later. (p. 33)

She didn't want to know how a thing was done, but why. That can be embarrassing. You ask Why to a lot of things and you wind up very unhappy indeed, if you keep at it. (p. 55)

We have everything we need to be happy, but we aren't happy. Something's missing. I looked around. The only thing I positively knew was gone was the books I'd burned in ten or twelve years. So I thought books might help. (p. 73)

That's the good part of dying; when you've nothing to lose, you run any risk you want. (p. 76)

Last Lines: Yes, thought Montag, that's the one I'll save for noon. For noon....When we reach the city.

This is my favorite in the dystopian genre. I'm with you, I can't imagine living in a world where owning books is illegal. Maybe that is why I love to collect them :)

I read this for the first time ever a few years ago. Eerie!