Reprint of the Year: Weekend at Thrackley 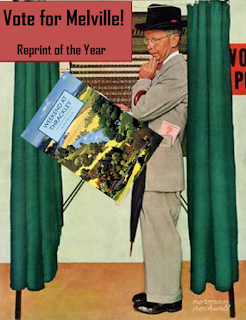 As I mentioned last week, Kate at Cross Examinging Crime has come up with another of her frequent brilliant brainstorms. Various publishing houses have gotten wise to the virtues of Golden Age and more recent vintage crime novels and have been producing reprint editions of both well-known and more obscure titles in the hopes of getting them into the hands of the mystery-reading public. Kate thought it would a great idea for some of us who love those vintage mysteries to features novels which have been reprinted in 2018 and make a pitch for our favorites to be voted Reprint of the Year. [For Kate's full idea, see her blog link above.]

So once again, I and my illustrious colleagues Aidan, Brad, Curtis, Daniel, JJ, John Kate, Moira, and the Puzzle Doctor will feature titles and make our best bid at Reprint stardom for our choices. Now...to start off, I must make a confession. I made a mistake last week. I told you all to vote for Jonathan Stagge's Death's Old Sweet Song. Not that the Stagge book isn't a fine nomination. It is--I gave you my reasons last Saturday. But, honestly, if you only cast one vote, then please give it to Alan Melville's Weekend at Thrackley.

I'm taking a revolver to Thrackley. You never know with blokes like Carson. A bit potty, but otherwise quite harmless. and I hate these harmless, potty people. They're always up to something.
~Freddie Usher

As Martin Edwards tells us in his excellent introduction*, Weekend at Thrackley was Melville's mystery debut. And what a debut. Melville gives us that old stand-by of the Golden Age--the country house mystery--with an interesting twist. There is no murder whatsoever until quite near the end and then there is no mystery at all about who did it. That's not the real mystery at all. The real mystery is why on earth did Edwin Carson, infamous jewel collector (some say that his means of acquiring at least a portion of his collection is not exactly...all that it should be), invite Jim Henderson down for a country weekend among a cast of beautiful and wealthy people simply dripping with jewels. Jim's a nice enough fellow. He's reasonably presentable at parties. But wealthy he is not.

Carson's invitation tells Jim that he was a friend of his father's back in the day and he always wanted to get a chance to know his dear friend's boy. Jim's not sure he wants to get to know Carson, but a man in his position isn't likely to turn down a weekend's free room and board. And when he finds out that his friend Freddie Usher (recent heir to the Usher diamonds, hence Carson's interest) has been invited as well, he's all set to go. Viewing the forbidding exterior of Thrackley and meeting Carson, an ugly man whose eyes one never sees, makes him wonder at the wisdom of his decision.

They were hidden by steel-rimmed spectacles, the lenses of which were so thick and so powerful that they made the eyes behind them almost invisible. Somehow one felt, rather than saw, the eyes of Edwin Carson. Jacobson [the butler] always felt at a cruel disadvantage when talking to him: like a mouse being watched by a cat in the dark, unable to see the thing that was staring at it, conscious all the time that every movement was being watched.

Yes, meeting Carson and the even uglier butler as well as the bruisers who serve as house servants certainly gives Jim pause. As the weekend progresses, Jim discovers hidden microphones, servants who aren't what they seem, and that the guests' jewels are disappearing right and left. And then one of the guests disappears....Jim would love to go for help, but there's just one catch: An electrified fence surrounds the country house and no one can leave until Carson allows it. Will Carson make off with everyone's jewels? Will Jim find out Carson's ulterior motive in inviting him for the weekend? Will justice prevail? You'll just have to read it and see.

So what's so great about this one that I just shoved Stagge out of the way and said, "No! Don't vote for him. Vote for my guy Melville!"? Well, this debut novel does not read like a debut novel to me. Melville has characterization down pat. His dialogue is funny and charming. And overall this is a downright funny mystery. Martin Edwards mentions the influence of A. A. Milne's The Red House Mystery on this novel (and I can see the connections Martin is making). But even more I see the influence of P. G. Wodehouse. The breezy dialogue (particularly between Jim and Freddie) and characters especially remind me of Wodehouse's Blandings Castle novels. Catherine Lady Stone could have come motoring over from Blandings instead of venturing out of London. The humorous interactions between the characters--from Jim's relationship with his landlady, Mrs. Bertram

"Good-bye, dearie," said Mrs. Bertram. "Take care of yourself, now." (For if half of what you read in the papers were true, you never could tell with these house-parties.)

to his friendship with Freddie Usher

...Freddie Usher and I went to the same school, which can usually be trotted out as an excuse for pinching another man's automobile.

to the scenes between Carson and his servants and the scenes among the dinner guests--these interactions are all worth the price of admission.

One other draw is the character of Carson's daughter. She appears as a light romantic love interest for Jim Henderson, but Melville also makes her more than just the girl to ride off into the sunset with the hero. Mary Carson plays a vital role in the resolution of the story and is far from the helpless female in need of saving. She is a very capable young woman who The Daily Observer, Mrs. Bertram's favorite newspaper, will identify as the "Girl Who Helped Outwit Dangerous Criminal."

I know I have a delightful book in hand when I am jotting down quotes right and left. I had to stop jotting--I would have been copying nearly 80% of the book. And I certainly could load this write up with many more than what I have sprinkled about. I am submitting Weekend at Thrackley for Reprint of the Year based, in large part, upon its sheer readability, Melville's way with characters & dialogue, and the fact that it was just plan good fun.

Both Kate (HERE) and Aidan (HERE) have given insightful reviews of this title as well. Check them out--and hopefully they will help you choose the right title for Reprint of the Year.


*You seriously need to get hold of this book and read the introduction where Martin does a much better job than I informing the reader about Melville and his work.

Labels: 52 Books in 52 Weeks, Reprint of the Year, Strictly Print

Another compelling case. No idea who to vote for given how well everyone is arguing for their respective books. This debut by Melville is intriguing as it is quite different from what he does in his later books. I agree that the real mystery is why Jim is invited down in the first place - which is an unusual mystery element as normally it is all about whodunnit.
I also love your visual for this post. But then with all your TNB imaging experience behind you I would expect no less!

Firstly thanks for linking to my review. I wasn't quite as enthusiastic about this as you were but then I think I came to it with really high hopes as Death of Anton is one of my favorite BLCC releases so far. That being said, this is still a very entertaining read, particularly for readers who like adventure-thriller stories in the style of Christie's The Man in the Brown Suit.

Where I definitely do agree though is that this really doesn't feel like a first novel. Melville's prose and characterizations are both on point and I agree that Carson's daughter Mary is a wonderful character who is more than just a love interest.

Aidan: I like this much better than Christie's Man in the Brown Suit. I think Mary Carson is a much stronger character than Anne Beddingfield even though the doesn't feature quite as prominently in this story.

Bev: I wouldn't disagree with either of those opinions! :)

You are doing a great selling job on this one! it sounds very good, and I don't think I have read any Alan Melville. How to vote, how to vote - it's going to be hard...

If you're completely new to Melville I'd recommend reading Death of Anton, as that is the strongest of his titles.

Kate: I've got Death of Anton on my radar. I've already read Quick Curtain and thoroughly enjoyed it as well.

I did the three vote option that Kate has generously allowed us. And I chose three writers whose entire output deserved to be reprinted. I have three of Melville’s books (one of which has yet to be reprinted) but I’ve not read any of them. I have this book, of course, and it’s still unread so I can’t vote for him at all. Bummer! But I did vote for Stagge...sort of. Because one of my votes went to Patrick Quentin who is the most represented writer in the long list of nominees. IMO, these guys are most deserving of the title whichever name the writing duo appears under.

Which unreprinted Melville do you have John? I have Warning to Critics. His best book that I have read is Death of Anton.