Challenge Complete: Where Are You Reading? 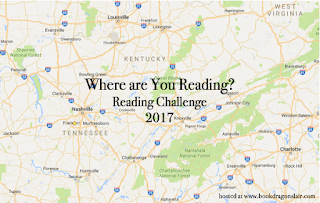 Where Are You Reading?
Hosted at Book Dragon's Lair

This one was all about places. There's one about states but this one counts cities, counties, and fictional locations too. Read a book set in a location for each letter of the alphabet. West Virginia only counts for W, Bowling Green only counts for B, but the Pern series by Anne McCaffrey that is on a fictional planet counts as P ;-)

I have finally completed my bookish travels--well, at least enough to cover the alphabet. I'm sure I'll be hitting more fictional places before the year is up. Thanks, for hosting! Hope we'll don our traveling clothes for another trip next year.

Labels: Where Are You Reading

Well done on finishing this one. I'm about halfway... it's a lot of fun.

Well done. You have visited a lot of different places in your literary travels.

It was a lot of fun. I hope she runs it again next year.

Good job! I still have Q, Y, and Z left. Have to really search my stacks for those! Hope to finish soon!